Unions coming back in all the right anti-union places

Unions are scoring important victories even as union-bashing reaches new lows. Corporate money talks louder than ever in the political arena. Republican presidential candidates have become noisy mouthpieces against working families. (The candidates need that campaign cash, after all, and now the way to get it these days is from billionaires' SuperPACs.)

As John Nichols in the Capital Times notes,


Like Wisconsin Gov. Scott Walker, Ohio Gov. John Kasich and Maine Gov. Paul LePage, they are anti-labor extremists whose opposition to free trade unions goes to extremes not seen since Southern segregationists sought to bar unions because of their fear that white workers and people of color were being organized into labor organizations that would threaten Jim Crow.

But despite these attacks -- or probably because of them -- unions are fighting back and winning. Truthout recently wrote about some recent union victories:

This extraordinarily rare string of victories leads me to believe that despite major attacks on workers’ organizing and collective bargaining rights, unions can take advantage of workers' backlash against these attacks and win big victories. They can still organize.

Organizing is only the first step, of course. The next one is to get that first contract. And the next is to ratify it.

Members of Local 200 in Milwaukee recently did all three in an extraordinary contract ratification. Local 200, of course, knows a thing or two about union bashing, as they've had to endure a year of Koch whore Gov. Scott Walker's attacks on working families. A few weeks ago, 421 Nestle's members of Local 200 in Burlington voted for a new contract by a stunning 14-to-1 margin.


Ready to vote their first ever Teamster contract Nestle workers in Burlington Wisconsin sent a message.

“This is the highest percentage yes vote for a contract and the largest group to participate in over 30 years” said Teamster negotiating team member Darold Lukaszewski.

Local 200 Business representatives Jeff Bandur and Randy Monroe praised the Stewards group with them on the negotiating team.

“It was a pleasure to work with this Steward group through this process” said Jeff. “Their dedication, long hours, and knowledge of the plant, along with knowing the wishes of their co-workers was invaluable.”

Some of the highlights of the new agreement were gains in wages, pension and health care contributions, along with numerous language enhancements.

Congratulations to all the Local 200 Teamsters at Nestle! 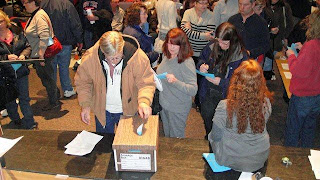