Teamsters march on Port of Seattle to support striking drivers 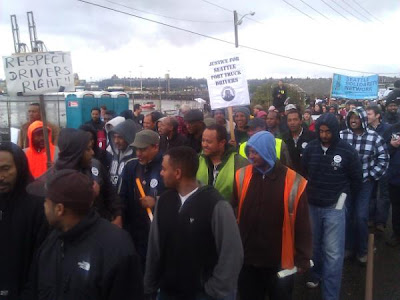 The rally to support 400 striking Port of Seattle truck drivers is in full swing, we learn from the Tweetosphere. Protesters chanting "We Are One" marched in the cold along the harborside to the Social Security Administration building, where they demanded fairness and safety. 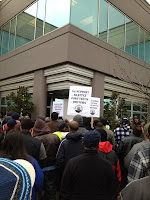 The crowd converged on Harbor Island at 9 a.m. Local news cameras -- KOMO and KIRO -- arrived and "tons of trucks" honked in support. Local 117 from Tukwila tweeted that drivers from the Port of Los Angeles spoke to the fired-up crowd. Signs read, "We Support Seattle Port Drivers," and "Respect Drivers' Rights."

The drivers have been on strike for two weeks. They are misclassified as "independent contractors," and forced to work for poverty wages in dangerous conditions. They are routinely harassed. Shipping companies are even refusing to pay them for work they did before the strike.

Here's how bad it is: $56 billion worth of goods passes through the Port of Seattle, but the drivers are paid only $9.38 an hour http://t.co/uWhazZDD 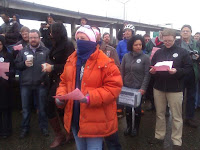 Jon Talton at the Seattle Times previewed the rally:


Non-union short-haul truckers are entering their third week of an action to get better working conditions at the Port of Seattle. According to Sage Wilson of the activist group Working Washington, a rally was to be held at 9 a.m. today at Harbor Island to show support for the drivers, organized by the Seattle Port Truckers Association and Puget Sound Sage. The Teamsters are also supporting the action.

The drivers, primarily immigrants, haul containers from the port to rail yards. They complain of poor working conditions and wages, as well as being held liable for safety violations over which they have no control. Last week, they were largely successful in shutting down movement of freight. ... Last week, the truckers successfully rallied for back pay from Edgmon Trucking, one of the short-haul (drayage) companies that employs the immigrant drivers.

Meanwhile, in Olympia, the House passed HB 2395, which would grant short-haul truck drivers more of the rights of employees under state law. Currently, they are treated as independent contractors. Still, a meeting involving port officials last week produced no resolution.

Solidarity, brothers and sisters!
Posted by Teamster Power at 2:03 PM