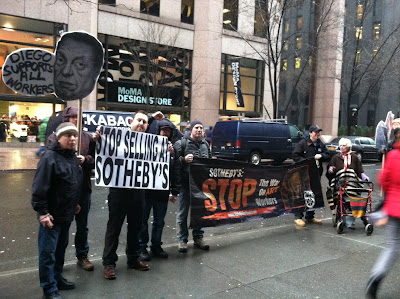 Our brothers who've been thrown out on the street by Sotheby's are right now standing on the street in front of the prestigious Museum of Modern Art in New York, demanding that it cut ties to the auction house because of the way it treats workers.

They've just put out a press release explaining their demands, which we'll quote from here:


The workers who rallied today outside of MoMA are not on strike; Sotheby's kicked them out of their jobs with no paychecks.

The auction house sparked the bitter labor dispute seven months ago when it locked out its 42 art handlers who belong to Teamsters Local 814. Their contract had expired at the end of July 2011. Sotheby's - which grossed $680 million in 2010, its second-most profitable year ever - wants to eliminate the union by demanding all future hires be low-wage temporary workers with no benefits and no collective bargaining rights.

MoMA recently sold several major works of art at Sotheby's, and has a long history of buying and selling with the auction house. This ongoing relationship is a direct contradiction of any claim the museum has to responsible behavior, according to Local 814 President Jason Ide. Ide said,


MoMA has always tried to act justly toward its own employees and been diligent in selecting responsible contractors," said Ide. "But the decision to do business with Sotheby's when it wants to eliminate good jobs just when New Yorkers need them most is very disturbing.

Occupy Wall Street activists have taken up the cause of the 42 art handlers, who lost their health care on Jan. 1, 2012 and are struggling to survive on unemployment. OWS recently dropped a large banner inside the museum that read "Sotheby's End Your Lockout. Hang Art Not Workers."

Teamsters Joint Council 16 President George Miranda had this to say:


The kind of reckless, anti-worker practices you see at Sotheby's should not be condoned or supported by leading institutions like MoMA. MoMA should be setting an example for the art world. Until the lockout is ended, all museums, especially those receiving money from New York taxpayers should cease all business with Sotheby's.