Did deadbeats cause the foreclosure crisis? 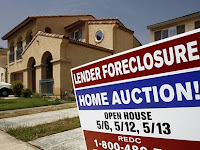 Some people sure think so. Here's a comment on an Economic Populist post by a Bank of America employee called "Anonymous Drive-by." He or she was upset that BofA had announced layoffs.


I hope BoA keeps kicking out the deadbeats and minorities that refuse to pay their bills. Because of you low lifes 30,000 of my coworkers are being laid off. Long live BoA

Charming, right? Well, "Anonymous Drive-by" got a boatload of responses from people who'd lost their homes due to BoA's fraud and incompetence. Here are a few horror stories:


We received a approval for short sale program 9/2/11 and were getting ready to sign the paperwork and send back to BOA when we found out that our home was foreclosed on 9/6/11!!!!! BOA quickly responded in letter saying that we actually did not qualify for the program. We have spent over three years trying to get loan mod, that was denied. Then short sale, which according to them was approved, but foreclosed on us anyway. We currently have a lawyer trying to help us with this mess.

I found out one day before my auction sale that I was not approved for a loan modification. Therefore, I had no time to do a short sale. The response from B/A was that I should liquidate but there was not time for me to do that since the sale was the next day. The house did not sell, B/A took the house back and I have until next month to find another place to live.

I and my wife are victims as well. Got our home in 2007 and had trouble with BoA from day one. Our payments were somehow always magically "late" and we would have to pay some fee to make the problem go away. We both had to change jobs and did get a couple of payments behind but they said "no problem, we will do a loan remodification!" Sent us a couple of letters saying we got it and a new payment schedule with the lowered payments. Went along as if there was no problem for 2 years. Then, in January of 2011, they send us a letter telling us we were 9 payments behind when we were current. We tried to solve the problem, to no avail. Over and over, for months. Then, in September, we get a letter from an attorney in St. Louis that the home had been sold at a foreclosure auction in August! In Missouri, you have to notify the homeowner that their home has gone into foreclosure. You have to notify them of an impending foreclosure sale. You have to place an ad in the local paper of a foreclosure sale. BoA skipped every one of these steps and foreclosed on the home without notifying us at all, except when they served us in September of 2011 that we would have to be out of the house by October 12th. We lost our home through no fault of our own.

I am now in a position where BofA is ready to do me in. I to was trying to obtain a MHA package always being told that the investor would not allow a modification. I was stuck in a securitized sub-prime mortgage loan package and sold off to an investor. BofA does not know who the owner of my mortgage is and if they do, they will not tell me. I sent them a 'QWR' for any and all documents that pertained to my loanand they will not and did not comply.

Posted by Teamster Power at 9:59 AM