Woo hoo! Good guys win one over the U.S. Chamber 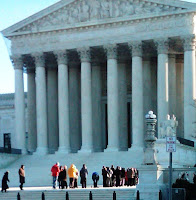 TeamsterNation is blown away that the U.S. Supreme Court voted 8-0 AGAINST the U.S. Chamber and the Spanish company it backed and FOR an employee whistleblower. (Yes, you may be wondering why the U.S. Chamber is spending members' dues defending a Spanish company against an American worker. It's because the Chamber's loyalty is to the international plutocracy, not the United States nor the U.S. worker.)

Anyway, we're blown away by the unanimous decision because big corporations have some good friends on the high court.

The New York Times has the story:


Firing a worker’s fiancé in retaliation for a sex discrimination claim filed by the worker is itself unlawful, the Supreme Court ruled on Monday.

Here's what happened: In 2002, Miriam Regalado complained to the EEOC that her employer, North American Stainless, paid her less than her male counterparts and twice demoted her because she's a woman. Her fiancé, who also worked at the company, was fired after the company learned about Regalado's complaint. The fiance sued the company, and the Supreme Court ruled yesterday that he had the right to do so.

North American Stainless, in Ghent, Ky.,  is owned by Spanish-based Acerinox. The U.S. Chamber and other business groups backed the company.


This case matters to more people than you may think. According to the Wall Street Journal,


Earlier this month, the EEOC reported that nearly 100,000 discrimination complaints were filed in the year ended Sept. 30, an all-time high. Retaliation was the most frequently filed charge, at 36,228 complaints, for the first time edging out racial discrimination.

Chalk one up for the good guys!
Posted by Teamster Power at 10:14 AM