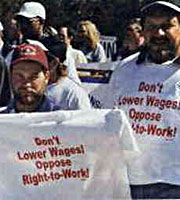 The New York Times reported this week that elected officials


...from Maine to Alabama, Ohio to Arizona, are pushing new legislation to limit the power of labor unions, particularly those representing government workers, in collective bargaining and politics.

If you think it can't happen in your state, think again.

Indiana lawmakers have already sent a bill banning project labor agreements and two right-to-work-for-less bills to committee, according to The Times in Indiana. You can read House Bill 1028 here, House Bill 1043 here and House Bill 1067 here.

Check out the Bad for Indiana website. It has a ton of information, including a power point presentation and video on "The Truth About Right to Work in Indiana, updates on the bills' progress, a paper how workers in the 22 right-to-work-for-less-states earn 6.5 percent less than other states.
Posted by Teamster Power at 5:15 PM