Get the straight story on upcoming Nafta-style trade deals 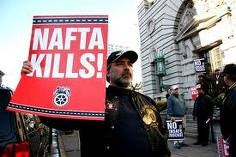 The House Ways and Means Committee, even as we blog, is holding a hearing on corporate- Nafta style trade deals with South Korea, Colombia and Panama. This is one of the first things the new Republican majority wants to get done in Congress. Rep. Dave Camp of Michigan is chairing the hearing, and he thinks trade deals are a great idea. The AP reported


...Camp, who chairs the Ways and Means Committee, told a hearing that completion of the trade deals with South Korea, Colombia and Panama was "a sure-fire way to create American jobs by growing U.S. exports of goods and services."

TeamsterNation prefers to believe the analysis put forth by someone not in the pocket of the multinationals. We look to the Economic Policy Institute, which tells us that trade deals with South Korea and Colombia would cost 214,000 U.S. jobs by 2015.

Public Citizen's Todd Tucker is liveblogging the hearing at firedoglake and he's doing a terrific job. For example, at 10:13 a.m. Tucker reports that Camp is touting his committee’s new “study” showing the U.S. has lost exports to Colombia because we didn't do a trade deal. Tucker knows the real story, which is that U.S. export growth to countries we have Nafta-style trade deals with is SLOWER than export growth to countries we don't have deals with. And he provides a handy link to prove it. (Not to mention that the violence against workers is getting worse in Colombia, not better.)