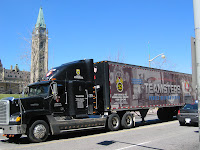 Why is it that bad ideas never seem to go away in politics? The bad idea to permanently let 100,000 pound trucks on federal highways in Maine and Vermont is back. Like Nafta, it has the bipartisan support of Republican Sen. Susan Collins of Maine and Democratic Sen. Pat Leahy of Vermont. And like Nafta, it will kill American jobs.

Collins and Leahy didn't get the weight limit permanently lifted in the last Congress. So now they're trying again. Something about "fairness" because other states raised the limit. TeamsterNation suspects campaign contributions may have something more to do with it.

My boss, Jim Hoffa, says raising the weight limit would turn big rigs into time bombs.  He's right. This is a bad idea that should go away permanently.
Posted by Teamster Power at 1:54 PM