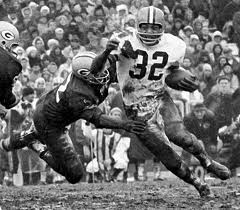 Lots of news lately on the NFL lockout front. Scott Fujita, linebacker for the Cleveland Browns (and brother of a Teamster) thinks a lockout is inevitable. The St. Petersburg Times reports Fujita, who's on the players committee,


...said concerns about injuries make adding two games to the schedule a major sticking point in negotiations. Fujita called the NFL's proposal "completely unacceptable" and "like a slap in the face."

Fujita also slammed Cowboys owner Jerry Jones for saying a lockout "wouldn't be disastrous" for the NFL. He called it "one of the more irresponsible things I've heard."
Meanwhile, Politico reported today that the players' association wants Congress to referee the dispute, but without much luck. Reports Politico,


As the specter of a year without pro football looms, the National Football League Players Association is taking its case to the halls of Congress — mounting an aggressive lobbying and public relations campaign urging lawmakers to push the owners to strike a deal before the March 3 deadline. It’s not an easy sell....there’s little sympathy for multimillion-dollar athletes clashing with billionaire owners over the size of their paydays...

Politico offers another reason Congress might be unsympathetic to the players: The players have more than tripled their spending on lobbying since 2008, to $350,000. But last year alone, the owners spent almost $1.1 million and gave nearly $600,000 to federal candidates in the last year.

Did we mention that the Teamsters have a long and storied history with the players association, and that Cleveland Browns great Jim Brown once passed out union cards for the players to form a Teamsters affiliate?
Posted by Teamster Power at 3:32 PM