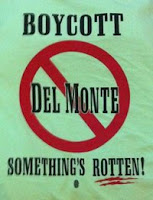 Take Pennsylvania. Longshoremen in Philadelphia/So. Jersey are fighting for their survival because Del Monte chose Holt Logistics stevedoring. According to the Facebook page, Union Longshoremen Fighting for Survival, Holt is a union-busting, low-pay, no-benefits stevedore.
Here's the description of their struggle:


Philadelphia /South Jersey longshoremen are having over 300 of their family sustaining jobs eliminated in a joint venture between third world minded Del Monte and union busting Holt Logistics ! Hopefully someone uncovers the way the Holt family has come to dominate the Phila./South Jersey waterfront . Basically a monopoly by a poverty creating co. is being formed because of a pay-to-play enviorment in this area . It must be stopped and it must be brought to light!

(You can show your solidarity for the members of the International Longshoremen's Association by boycotting Del Monte and posting the image as your facebook profile picture.)

We also learned from one of our brothers at the Brotherhood of Maintenance of Way that Pennsylvania's outgoing governor, Democrat Ed Rendell, is joining a union-busting law firm. Here's the message:


He will be returning to the law firm of Ballard, Spahr, Ingersoll, and Rand. This is the firm that SEPTA gives a huge majority of their outside counsel to.

Philadelphia, with a long, proud history of being a "union town" (AFSCME was founded here) has dealt with these people for many years. When municipal workers and transportation workers try to advance their cause, this firm is the first to be called in to stick it to the unions.

The BMWE, much like many other unions, has repeatedly faced this firm in contract negotiations, arbitrations, and other legal arenas for many, many years. These bastards are at the very core of the "sovereign immunity" argument that SEPTIC (sic) has used in their attempts to strip our members of their federal rights under the FELA. At every turn,this firm has been brought in as a tool to go against organized labor and the working class people that they represent. Be forewarned,this firm is mighty and they are not isolated to the Philadelphia area.

...And,by the way -- we now have a new governor of the Commonwealth. You guessed it, a Republican who wants to "trim the fat." Translation : break the unions.

Now you see why it's a commonwealth, all of the wealth is common amongst the ones in power and not so much for the rest of us.


Solidarity, brothers and sisters.
Posted by Teamster Power at 5:18 PM