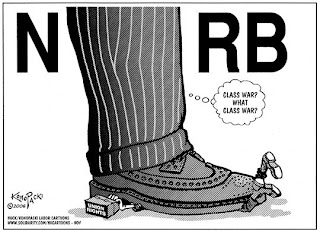 Obstructionist senators have held up the nominations of three members to the National Labor Relations Board (NLRB) for months. Now Senate Majority Leader Harry Reid is about to push forward with votes that would ensure working Americans continue to have a federal agency that protects their right to collectively bargain.

Working families deserve to a have a voice in government that protects their rights in the workplace. But unless the Senate acts by the end of next month, they won't have one. The U.S. Chamber of Commerce and other corporate apologists are doing all they can to prevent a vote. This isn't about companies being inconvenienced, however -- it's about enforcing a 65-year-old law that ensures fair wages for workers and puts food on the table for millions.


Richard Griffin, as general counsel for the International Union of Operating Engineers, is a strong choice for the NLRB. Sharon Block, currently deputy assistant secretary for congressional affairs at the Labor Department, has worked for the late Sen. Edward M. Kennedy, a great protector of workers’ rights.

And the appointment of Terrence Flynn, the Republican nominee to the NLRB, shows the president’s determination to rise above petty partisan politics.

Many members of Congress have also called on the Senate to approve the three. Reps. Linda Sanchez and Joe Courtney unveiled a letter signed by 201 House Democrats last week that demanded Senate Minority Leader Mitch McConnell allow a vote on the NLRB nominees to move forward:


The NLRB provides critical protections to American workers and gives businesses much needed labor certainty.  Each day that the Board sits idle is one in which workers’ lawful rights are put at risk. This continued ideological obstructionism is denying hardworking Americans the crucial worker protections that the NLRB provides. We urge you to withdraw this partisan demand and allow the Senate to fulfill its constitutional responsibility to consider presidential appointments, and to do so without continued delay.

It is time to act now!