What's dignified about a scab?

Nothing at all. But the Dignity Memorial company, also known as Houston-based SCI, is asking striking funeral directors to scab.

This is the same company that hired armed thugs six years ago to spy on Teamster funeral directors and drivers during negotiations.

SCI could learn a thing or two about dignity.

The striking funeral directors and drivers belong to Local 727 in Chicago. They walked off the job at 16 funeral homes a week ago because SCI refuses to negotiate in good faith.

Here's what happened with the invitation to scab, according to the local's press statement:

Lawrence Mandel was picketing in front of Dignity Memorial Piser Funeral Services in Skokie when he received an email:


We are contacting you for a potential opportunity on a temporary basis due to a strike in progress at some funeral homes owned and operated by SCI Illinois Services, Inc. These temporary assignments could lead to permanent positions based on the outcome of the strike and your performance; a permanent opportunity is not guaranteed... 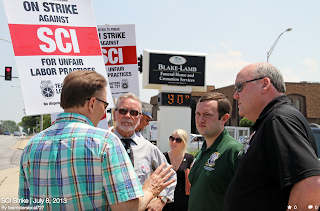 From what we understand, the few funerals Dignity has performed have left families dissatisfied.

Dignity Memorial has not contacted Teamsters Local 727 to resume talks.

Jay Horowitz, a 20-year funeral driver, explained why they're striking:


Two days before the strike, our negotiating team made an offer to Dignity that contained lower wage increases than they were offering so we could maintain our pension and health benefits.  It kept the rest of the contract intact with virtually the same language we’ve been working under since 2007. We’re asking SCI the same thing we asked when bargaining began:  let’s negotiate a fair contract.