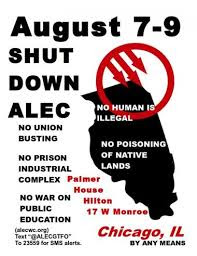 Tim Carpenter at the Topeka Capital-Journal broke the story five days ago:


More than two-dozen Kansas legislators, including top Republican leaders of the House and Senate, plan to participate at the national convention in Chicago of an organization dedicated to layering a corporate agenda into politics at state Capitols, officials said Friday.

State policy allows a subsidy of registration fees for each legislator in attendance, which would be a minimum of $475. Other travel, hotel and meal costs can be covered by taxpayers only if the lawmaker serves in a leadership role in ALEC, said Jeff Russell, director of Legislative Administrative Services.

And in a scathing editorial, The Hutchinson News excoriates the Kansas hypocrites:


...a group of self proclaimed budget hawks apparently missed the memo that government spending is the root of all evil, and that even the smallest government expenditure is a misuse of hard-earned taxpayer dollars.

According to the legislative administrative service, in fiscal year 2012 legislators received $150,666 for convention-related travel expenses. In fiscal year 2013, lawmakers received total reimbursement of $119,528 for such travel – and the upcoming year totals more than $4,875 so far, with the filing deadline not ending until June 30, 2014.

Kansas lawmakers are certainly free to attend whatever conferences they think will help them become better legislators. But it’s a special type of hypocrisy when a group of legislators who brand themselves as budget watchdogs and small government conservatives eagerly line up for a taxpayer handout to help pay for a voluntary networking weekend in Chicago.

ALEC isn't really about small government. ALEC just wants one thing to be small: constraints on corporate plunder of the public trough. No one should be surprised that self-serving hypocrites are taking part in the looting by taking a taxpayer-funded ALEC trip.

ALEC's stench has wafted all the way across the Atlantic, where the Irish blog Vestibule caught wind of these taxpayer-funded ALEC trips. Vestibule wrote a hilarious send-up of these ALEC "conferences" a few years ago, which we will share with you below:


Now, imagine if you will that you are a Republican lawmaker in a state whose legislature is controlled by your party.  You are approached by persons you admire, with an invitation to attend a conference under the aegis of ALEC.  And let us situate that gathering at some plush and exclusive enclave- Palm Springs, for example.

There you and your spouse will be met and looked after (families are distinctly welcome)  by business leaders whose names ring with the reassurance of real power- Fortune 500 executives and their staffs.

You will socialise- play golf on exquisitely maintained courses, dine on the most blissful fare, and exchange neatly patented views with the very men and women who concocted them. You will be flattered and cajoled.  You will be welcomed into circles you have always aspired to enter- assuming you were not born there, a condition of privilege discreetly enjoyed by many state office-holders.  Finally, you will be showered with political support in the form of crucial campaign donations and endorsements.

And really, all you have to do is attend a two-hour meeting with friendly representatives of, let's say, the commercial prison industry.

At this meeting you will be presented with a handsome, well-written, entirely serviceable piece of legislation.  It may contain the word "reform" in its title.  (Again, think Humpty Dumpty)
The matter at hand could involve a perfectly reasonable tightening of immigration law.  Or the justified imposition of harsher, more restrictive criminal sentences.  The bill may mandate the laudable establishment of profit-making industries in a state penitentiary system, or the withdrawal of wasteful educational services to undeserving prisoners.

But whatever the avowed goal of the prefabricated legislation, you may be sure its passage will result in enhanced revenue and power for those companies which drafted the law.

Posted by Teamster Power at 3:45 PM