'Let's keep the gamblers out of banks' 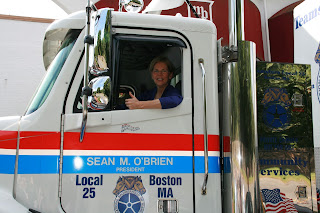 Wall Street on Parade reports they were probably expecting a pat on the back because they're requiring banks to keep more money on hand in case they get into trouble (as they did in 2008 when they crashed the economy). Instead, Warren scolded them for failing to put bankers in prison.

The Hill reports Warren asked why they chose to fine banks accused of wrongdoing instead of prosecuting them for crimes. She asked for more information about bank violations and the agreements reached with the banks.:


Then the public could evaluate for themselves if you’re really out there fighting on their behalf.

Warren also announced she and three other senators, including Arizona's John McCain, were introducing a bill to restore Glass-Steagall. That's a Depression-era law that separated risky gambling on Wall Street with traditional banking. It worked to keep the financial system stable for decades, until the banks managed to get it repealed.

Wall Street on Parade reported the regulators stared in silence as Warren described why she was sponsoring the legislation. (They represented Treasury, FDIC, Federal Reserve and Office of the Comptroller of the Currency.) She told them:


“…the four largest banks are now 30 percent larger than they were just five years ago and they have continued to engage in dangerous, high-risk practices. So, later today Mr. Chairman, Senators McCain, Cantwell, King and I will introduce a 21st Century Glass-Steagall Act. For half a century after the Great Depression, Glass-Steagall kept this country safe by separating the risky activities of investment banks from the basic checking and savings accounts that consumers rely on every day.

“The banks lobbied for weaker regulations and eventually the regulators started unraveling Glass-Steagall and finally in 1999 Congress repealed what was left of it. So now we propose a 21st Century Glass-Steagall so that we can return to the basics and try to keep the gamblers out of our banks.

“Now, based on what the regulators did to Glass-Steagall over the past 30 years, I don’t expect that anyone on this panel will jump up and endorse the new Glass-Steagall bill; even so, we’re going to keep pushing for it.”