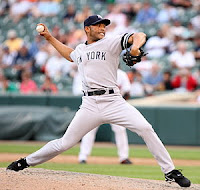 Yankee reliever Mariano Rivera, one of the greatest pitchers in baseball history, is making a farewell tour of the working-class people who make the game what it is.

David Waldstein describes how he said goodbye at Citi Field in Minneapolis:


...there was no owner in the lavish suite. Across from Rivera, in a semicircle of 15 chairs, sat a group including a security guard, a grounds crew worker, an organist, an usher and a season-ticket holder, all brought in to be in the presence of Rivera, the Yankees’ closer...

After announcing in spring training that he would retire at the end of this season, his 19th with the Yankees, the 43-year-old Rivera has embarked on an unusual tour of American League cities, meeting with ordinary, behind-the-scenes workers and some fans, who drive the machinery of baseball.

Here's why he's doing it:


...he wanted to express appreciation for the many people in baseball who were not highly paid players, and to learn more about their lives and work.

“I just want to say thank you,” Rivera said in an interview last week. “I’ve been so blessed to be able to play this game, but we wouldn’t be able to do it without the help and support of all these people behind the scenes. They make baseball work as much as we do.”