If more U.S. cities recycled like Seattle, a million-plus good jobs would result, according to our friends at Partnership for Working Families. We're cross-posting their blog today about a new report that explains how:

The top 37 metro areas in the country are poised to create new jobs, make bad jobs into good ones, and solve tough environmental problems by transforming the way they handle their trash and recycling.

Transforming Trash in Urban America, a new report from the Partnership for Working Families, shows that creating jobs and slowing climate change through a new approach to waste management is both possible and urgent for America’s largest cities.

Our cities bear the brunt of the national jobs crisis, as well as suffering the worst effects of climate change, whether through superstorms, drought, fires, or heat waves.  The combination of national and global scale problems with federal political paralysis requires local solutions that add up to national impact.

Transforming the way we deal with our waste is one of the best ways cities can take local action on our jobs and environmental crises.  While the environmental benefits of recycling are well established, the best approach also raises standards in what are some of the worst jobs in country, and becomes a catalyst for economic development and job creation.   This comprehensive, sustainable approach to waste and recycling can yield dramatic results.  Tellus Institute’s More Jobs, Less Pollution study, prepared for labor and environmental organizations, found that we can create 1.3 million jobs and reduce greenhouse gas emissions at a level equivalent to shutting down 72 coal-fired power plants. 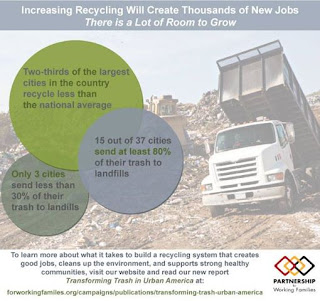 Transforming Trash in Urban America analyzes the top 37 cities in the country and asks whether the innovative recycling models being developed in a few cities could be applied broadly. We found huge potential to build good waste management and recycling systems that would maximize both environmental and economic benefits.

We found a few cities doing a great job, many more on the cusp, and a significant number who are early enough in the development of their recycling systems that they can include job standards and creation from the outset.
The Partnership for Working Families, together with environmental, labor, and community allies, is building a ground up movement to tackle jobs and climate problems through a shift to comprehensive, sustainable waste management and recycling solutions.  Transforming Trash in Urban America shows that city level change can add up to national impact.
Posted by Teamster Power at 12:30 PM