Wisconsin police just arrested 22 people today for singing "Solidarity Forever" in the Statehouse. The singers have been musically protesting Job-killer Gov. Scott Walker every weekday since March 11, 2011 -- ever since he rammed an ALEC bill through the Legislature to destroy public service unions. The Solidarity Sing Along happens every weekday from noon to 1 pm in the Capitol Rotunda. Dozens of union supporters stand in a circle and sing pro-union songs like, well, "Solidarity Forever." 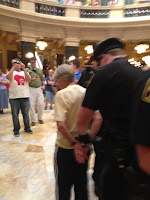 Among those arrested today was an 80-year-old woman.


Capitol Police have been threatening arrests this month, after U.S. District Judge William Conley blocked the Walker Administration from requiring permits for gatherings at the Capitol involving 20 people or fewer, but did not block a requirement that larger groups obtain permits...

25 citations were issued today to 22 people for demonstrating without a permit. Three people received a second citation after rejoining the singers after their first citation. The fine amount for a no-permit citation is $200.50. Marquis says one individual received a disorderly conduct citation for spitting on a singer/protestor. 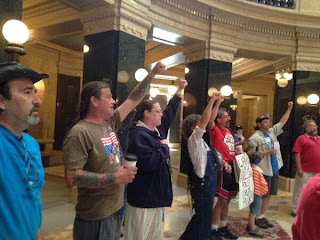 The Solidarity Singers clearly drive Walker batshit crazy. He's been trying to shut them down for months, along with myriad other crackdowns on freedoms of speech, assembly and right to petition one's government for a redress of grievances. Wisconsin Wherls blogged about Walker's attempt to silence the singers in April. (The post also describes how Teamster and Wisconsin state Sen. Dave Hansen brought 100 schoolchildren to listen to the singing.)

We turn to our friend, blogger blue cheddar, for some perspective on these persistent protesters:


I stand by the Solidarity Sing Along (SSA). I do not think the Solidarity Sing Along is detrimental to “our movement”. It is in fact the movement’s most persistent element – the pilot light that you should keep afire. It began on March 11, 2011 as an extension of the occupation and has persisted through the courage of individual Wisconsinites who had to figure everything out on their own and under pressure. It lives in defiance of an autocratic administration that tries to eradicate it. Nobody has allowed it to die out of neglect, “civility”, infighting, or excuse-making. It is free and yet held tightly in common. It is amazing.

Posted by Teamster Power at 4:24 PM