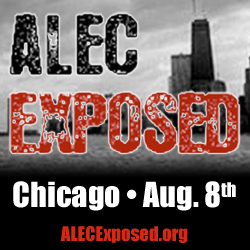 ALEC, the escort service for corporations and state lawmakers, was responsible for 117 bills in 40 states to lower wages, reduce benefits and weaken workers rights this year. That's according to a report released today from our friends at the Center for Media and Democracy called "Just How Low Can Your Salary Go."

"As working Americans speak out for higher wages, better benefits, and respect in the workplace, a coordinated, nationwide campaign to silence them is mounting -- and ALEC is at the heart of it," CMD tells us.

ALEC has been trying to tilt the playing field in favor of corporations -- and at the expense of workers -- since 1979, when it began pushing No Rights At Work bills. When Republicans took control of 26 statehouses in 2010, ALEC was emboldened to attack workers as never before. Newly elected Job-killer Wisconsin Gov. Scott Walker followed ALEC's marching orders and took collective bargaining rights away from nurses, snow plow drivers and school teachers.  Ohio Gov. John Kasich soon followed with the much-hated (and ultimately repealed) SB5. All along, ALEC-supported extremists had the financial and political backing of the Benedict Arnold Koch brothers.

The CMD report is the third in a series of four being written in the run-up to a protest against ALEC in Chicago on Aug. 8. The Chicago Federation of Labor will demonstrate outside ALEC's 40th anniversary conference at the Palmer House.


ALEC is bringing state politicians to Chicago to push their agenda that rewards CEOs at the expense of middle class families and our public schools and puts our safety at risk. Forty years of ALEC is nothing to celebrate.

The report tells a frightening tale of giant corporations able to hijack governments in order to make their CEOs even more obscenely wealthy than they already are. CMD documents the sordid details. Here are a few:
Here are the corporations that benefit from these policies: Pfizer, FedEx, Visa, Exxon Mobil; the Spanish company Cintra and the Australian companies Macquarie and TransUrban; tobacco companies Altria and Reynolds American. All charming folks.

Here's who doesn't benefit from these policies: non-billionaires. In Wisconsin, where Walker is the poster child for ALEC stooges, the state's economy has been in a freefall almost from the minute he took office.

Find out how ALEC is trying to turn your state into a feudal serfdom by reading the whole CMD report here. And if you can make it, go to Chicago on August 8.
Posted by Teamster Power at 4:34 PM