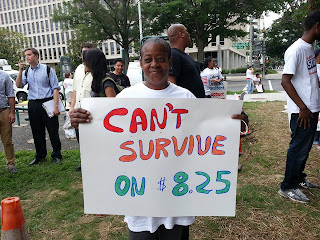 The revolt against poverty wages surged ahead in Washington, D.C., today as more low-wage Smithsonian workers walked off the job for a third time.

And last night, the DC city council defied Walmart and approved a bill that would require big-box retailers to pay a living wage of $12.50 an hour. Walmart threatened to scuttle its plans to build three stores in the city. (Don't let the door hit you on the way out.)

Today's action continues a string of one-day strikes against poverty wages that began last fall and accelerated in the spring. Thousands of workers at fast-food restaurants and retail stores have walked off the job in cities around the country to demand better pay and the right to form a union. The government contract workers concentrated their protests in the nation's capital.


Low-wage workers connected with the nation’s marquee museum network held a strike on Thursday, continuing a string of recent demonstrations to promote better pay for employees at federal buildings.

The events started with a press conference and a street-theater sketch near the Air and Space Museum, where actors playing Ronald McDonald and Uncle Sam climbed into bed together. That performance was meant to represent the relationship between private-sector CEOs and the federal government.

In case you miseed it, the U.S. government creates more poverty than Walmart and McDonald's combined. Amy Traub at Demos, the group that uncovered that disturbing fact, commented today: 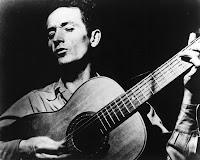 But while workers’ families are struggling, not everyone working for a federal contractor or concessionaire is poorly paid. Under current law, contractors can be reimbursed by taxpayers for as much as $763,029  in compensation for each top manager. This is one way our current model of federal outsourcing and contracting worsens the trends toward inequality already harming our economy.

At the bottom of the Smithsonian’s website is an image honoring the centennial of Woody Guthrie. There’s little question where this balladeer of ordinary Americans and their strugglesincluding fights for better pay and union representation—would have stood in the current dispute between the Smithsonian and the workers who serve food to its patrons. Officials at the Smithsonian would do well to listen to any of Woody’s directly pro-worker and pro-union songs available for purchase from their own website.  But the most relevant message might come from the Dust Bowl classic, “Goin' Down The Road Feeling Bad.”