32 Walmart warehouse strikers back on the job

Walmart warehouse strikers successfully returned to work today at 8 a.m. after walking off the job Wednesday. They returned to the Mira Loma, Calif., warehouse operated by Olivet International, where Walmart sells 70 percent of the merchandise moved.

Warehouse Workers United tells us the warehouse strikers accomplished what they set out to do:

It was the latest in a surge of sudden, short strikes aimed at bringing attention to poverty level wages, dangerous workplaces and retaliation by management of powerful multinational corporations like McDonald's and Walmart.

The Los Angeles Times and other news outlets reported on the warehouse strikers:


The employees said they had told management that there was inadequate access to drinking water, lack of ventilation and blocked fire exits, among other conditions...

...workers submitted a formal complaint to the state's Division of Occupational Safety and Health, or Cal/OSHA, in May.

A spokesman for the government agency said they are investigating the workers' claims. Cal/OSHA has six months to complete its investigation, he said... 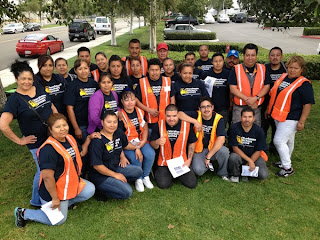 The warehouse strikers began Wednesday with a picket line outside the Olivet building. Then, Warehouse Workers United tells us, the warehouse strikers went to Walmart’s California headquarters in Irvine. They were prepared to deliver a letter documenting their concerns, but company officials wouln't open the door.

Striking workers were prepared to deliver a letter to Walmart documenting their concerns and asking why Walmart hasn’t responded to an ethics complaint made May 28. Unfortunately, company officials wouldn't open the door.

Meanwhile, in New York City, a group of supporters visited the Olivet offices to deliver a message supporting the warehouse strikers. The supporters demanded Olivet stop illegally retaliating against workers and let them return to work. And in Lakewood, Calif., the warehouse strikers demonstrated outside of a Walmart store, putting tape over their mouths reading “Walmart Stop Silencing Workers” in support of store employees who were illegally fired for speaking out. There they found the Walmart official they'd been looking for in Irvine and delivered the letter to him.

Posted by Teamster Power at 3:05 PM