California Teamsters have long opposed enterprise zones. Earlier this year, Teamsters were laid off when two companies --  building products distributor Blue Linx and laboratory supply and distribution company VWR -- moved to enterprise zones in California. Our brothers and sisters were told the law forbade them from following their jobs.

In place of enterprise zones, the law establishes the Governor's Economic Development Initiative, meant to create good jobs. A statewide sales tax exemption will apply to manufacturing equipment or research and development equipment purchases for biotech and manufacturing companies. 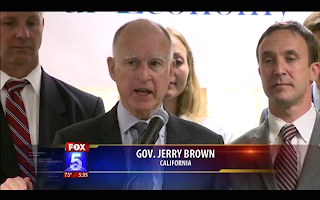 Brother Doug Bloch from Joint Council 7 in San Francisco witnessed the signing and called it a "great moment for the state's workers."

Under the new program, money that was originally directed toward companies like Walmart and FedEx to create minimum-wage jobs will now go to manufacturers who create new jobs that pay at least $12 an hour. Hiring credits could go to Teamster employers in food processing, dairy, breweries, beverage and more. They'll also be eligible to get tax credits for equipment investments, including any retrofits they do to their plants to comply with AB 32, the Greenhouse Gas initiative.  And employers who want to transfer jobs now need to offer people the right to move with their job at their current rate of pay.

In short, this is a big win for us.

Californians can now be more secure that corporations will not eliminate their jobs by moving their plants just to pad their bottom lines. Teamster strong!