Chicago Tribune to Teamsters on strike: 'Pay up, or no ad'

The Chicago Tribune is refusing to run an ad from Teamster funeral directors unless they spend the same amount on advertising -- $5,700 -- as the giant corporation they're striking against.

Fifty-nine funeral directors from Local 727 were forced to walk off the job yesterday morning due to the unrelenting greed of SCI, the Dignity Memorial company.Seeking support from the community, the funeral directors tried to place ads in the two biggest area newspapers: the Chicago Sun-Times and the Chicago Tribune.

Unlike its rival, the Chicago Sun-Times, the Tribune did run an ad from Teamsters Local 727 last week. The ad linked to a website www.integrityinillinois.com that outlines their grievances -- wage freezes, higher health care costs, elimination of the pension. And it offers a list of alternative homes where grieving families can turn for help.

The Sun-Times refused to run a similar ad. And then yesterday, the Tribune notified Local 727 that it would not run another one of their ads unless it bought one as expensive as the one paid for by SCI.

To add insult to injury, the Tribune (which may, by the way, be purchased by the Benedict Arnold Koch brothers) published a hideously one-sided, pro-SCI story about the strike. 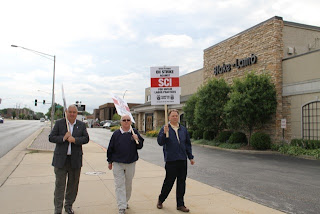 Chicagoland union households don't have much of a place to turn for print news anymore. (But at least there's WIN Labor Radio!)

Here are the addresses of the funeral homes they're picketing: