How the media hyped an IRS non-scandal 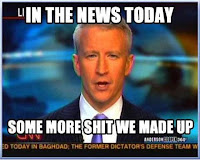 The mainstream news media misses some of the biggest stories in North America today. You know, drug war in Mexico. Or the criminal bankers who don't go to prison. Or the impoverishment of the working class.

R.J. Eskow writes in "Where the Hell Is the Outrage?"


Conditions continue to become objectively worse for the great majority of Americans. But these ongoing changes — in actual wages, in employment, in social mobility and wealth equity — have received very little media attention or meaningful political debate.


It’s not that things aren’t changing. It’s that people don’t know they’re changing. And without that knowledge the public becomes a canary in a coalmine, only aware of its declining oxygen supply when it keels over and dies.

It’s an almost classic state of alienation, in which people may be acutely aware of their own increasing difficulties (although sometimes they can be numb to that as well) but experience them in a state of isolation. That turns the anger inward, leading to crippling reactions like guilt and despair. And repeated individual failures — failures made increasingly likely in a skewed system — lead to a sense of learned helplessness.

If mainstream media reporters don't miss a story, they may well get it wrong. Like the IRS "scandal," where supposedly "liberal" IRS employees investigated "conservative" Tea Party groups.

Only, it didn't happen. (And, by the way, even if it did, there's plenty of evidence that radical billionaires like the Benedict Arnold Koch brothers are (a) not disclosing their political contributions and (b) funneling money to phony Tea Party groups like Americans for Prosperity.)

Alex Seitz-Wald in Salon blows the whistle on how the mainstream media "outrageously blew the IRS scandal."


...we know that in fact the IRS targeted lots of different kinds of groups, not just conservative ones; that the only organizations whose tax-exempt statuses were actually denied were progressive ones; that many of the targeted conservative groups legitimately crossed the line; that the IG’s report was limited to only Tea Party groups at congressional Republicans’ request; and that the White House was in no way involved in the targeting and didn’t even know about it until shortly before the public did.

As a result of the media's misreporting, half of the American people wrongly thought the White House ordered the IRS to target Tea Party groups, Seitz-Wald writes.

Have reporters corrected the record?

We think you know the answer.
Posted by Teamster Power at 2:03 PM