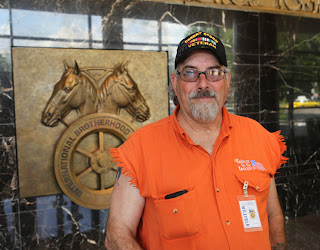 No one was surprised one little bit when a Minnesota Teamster who's also a military veteran dropped by IBT headquarters today. He was in town for the XXVI annual Rolling Thunder Run, held in Washington every Memorial Day.

The annual motorcycle rally is a natural fit for Teamsters, who love their motorcycles and are proud to honor the men and women who serve their country. Nearly half a million cyclists attend the rally every year.

Riders gather in the massive Pentagon parking lots and then run through the streets of Washington, D.C. Afterward,they meet old and new friends and participate in the Memorial Day events. Friday evening they'll hold a candlelight vigil at the Vietnam Veterans Memorial. There'll be a wreath-laying ceremony at the Tomb of the Unknown Soldier and at Arlington National Cemetery and a national moment of silence for those who've given their lives for their country.

We're guessing that Bob Leslie isn't the only Teamster to bring his bike to Washington this weekend, but he was the first to visit Teamster headquarters. He's a veteran of Desert Storm and a member of Teamsters Local 120 for more than 20 years.

Leslie is a concrete driver in St. Paul, Minnesota.