Hundreds of Peruvians -- and a Teamster -- protested today in front of the hotel in Miraflores, Lima, where the latest round of secret Trans-Pacific Partnership (TPP) negotiations is taking place.
The Teamsters are concerned the 12-nation trade deal could open domestic markets to a flood of dairy products from New Zealand, jeopardizing the 30,000 dairy workers represented by the union. Family farmers are allied with the Teamsters in trying to take a dairy deal off the table.

Peruvian protesters are taking a stand against the deal because they fear it will lower environmental standards to the level of sweatshops and toxic dumps in China and Vietnam. They are concerned it will restrict freedom of speech on the Internet and make it impossible for poor people to get access to life-saving drugs.

"They're standing up for workers and consumers and communities throughout the 12 Pacific Rim nations involved in the negotiations," Mike Dolan, the Teamsters trade representative emails us from Lima. 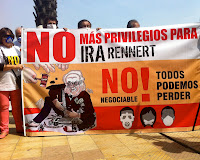 
The Teamsters' goals in Lima include supporting the Peruvian civil society groups who are protesting the TPP on the outside and, on the inside, to persuade the negotiators to open up the process to the public and slow it down so we and the Congress can know what is being negotiated in our names. The U.S. negotiators want to ink this deal in October but, now that Japan will be joining the TPP in the summer, most “free trade” handicappers agree that it probably won’t get finished this year.

Today's protest in Peru follows a series of recent rallies against the trade deal in a half dozen countries.  Voxy.cohttp://www.voxy.co.nz/politics/protests-against-tpp-five-countries/5/155033 reports from New Zealand:


Activists in the US have 13 events planned across the country for May 11. Australian unions and community groups are holding rallies in Sydney and Melbourne. The Council of Canadians is launching a ‘trade tour’ in at least six cities across Vancouver.

In Peru, groups campaigning on public health and access to medicines, the devastation caused by mining in the Amazon basin, and violations of indigenous rights are launching two weeks of activities to coincide with the talks in Lima.

Malaysian activists held a rally several weeks ago. Japanese opponents of the TPPA plan a big rally in Tokyo on Saturday 25th May, which is when Japan is due to become an official party to the TPPA negotiations.

Dave Johnson tells us more about the secret talks in Global Research: 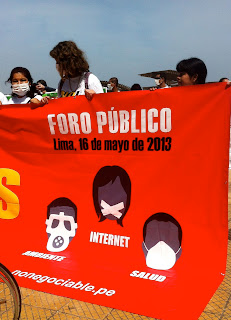 The TPP process appears to be set up to push corporate interests over other interests. The TPP is being negotiated in secret, so what we know about it comes from leaked documents. Even our Congress is being kept out of the loop. But 600 corporate representatives are in the loop while representatives of groups that protect working people, human, political and civil rights and our environment are largely not in the loop...

It looks like TPP will go way beyond what most of us would consider to be in a normal “trade” agreement. TPP — negotiated by giant corporate interests — appears set to give giant corporations a veto over a country’s ability to set many laws and regulations that are designed to reign in those corporations. Quelle surprise!

Leaked documents appear to show that negotiators are writing provisions that will set rules that are binding on Congress and our state legislatures tell us what laws and regulations our own country can pass or enforce in areas like: