Got water? A handful of rich Calif. families do, and they're looking to sell 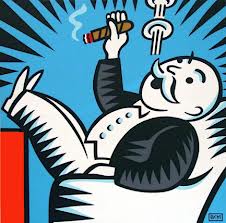 California's Central Valley is known as America's breadbasket for the sheer volume of food it produces. But the region has a darker reputation for those who live and work there due to a handful of ultra-rich families who run the place. How those elites make their money -- on water --  is a disturbing tale.

Although they don't reside there, some of the country's most well-known families have interests in the Central Valley. The former owners of the Union Pacific Railroad, Standard Oil and the Los Angeles Times are among them. And now their decedents lord over the area like the oligarchs their families once were, writes Yasha Levine at nsfwcorp:


Their offspring still run the place like their very own banana republic. They fly in to inspect their businesses on private jets, buy politicians, own entire towns, import migrant slave labor, pollute and plunder with impunity and bend everything and everyone to their will. They wield enormous political power, and the vast tracts of land under their control boggles the mind. You can drive for an hour at 80 mph and only trace one side of a single oligarch-family farm. And yet, they are nearly invisible to the general public.

In a show of power, one of these corporate interests disguised as a farmer made a huge profit in 2009 when it sold water to local water agency in drought-stricken California. The price? $73 million!:


... the farmer was a private Silicon Valley company called Sandridge Partners owned by the Vidovich family. The Vidoviches own cotton fields and almond orchards in the Central Valley. They also control a small real estate empire in the Bay Area, complete with office complexes, condominiums, mobile home parks, hotels and shopping centers. John Vidovich, the current family patriarch, lives in a $11.4 million home in the Los Altos Hills, a ritzy wooded area overlooking the bay just south of San Francisco sitting in the 8th most expensive zip code in America. To top it all off, the Vidovich clan is among the biggest welfare queen-farmers in the country, taking in $11 million in subsidies since 1995.

But as the article states, the Vidoviches are far from the only family getting rich off of water. There are many others, led by the Resnick family of Beverly Hills, who own about 300 square miles in the Central Valley:


The Resnicks helped engineer a covert scheme that subverted the state's constitution by partially privatizing California's water supply, creating the concept of "paper water" and opening up an unregulated water market for the first time in California.

The Resnick's “paper water” market was a speculator’s wet dream. Even Enron tried to get in on Oligarch Valley's paper water bonanza in the early 2000s, opening up an Internet-based operation next door to the Resnicks in the hopes of creating the etrade.com of H20, where future traders from would around the world would log in from home and buy and sell water in between sessions on YouPorn.com. Called Azurix, it would function as an “exchange on the Internet for buying, selling, storing and transporting water in the West, hoping to make water a traded commodity much like natural gas or electricity,” the Wall Street Journal wrote in 2000.

Enron's water speculation utopia crashed and burned, but the Resnicks emerged as the biggest water traders in America. Among other things, the Resnicks made hundreds of millions of dollars selling water back to California for a 100% markup.

All this happens while many Central Valley residents are mired in poverty. The article notes the Fresno, Modesto and Bakersfield metropolitan areas are among the poorest in the country.

The whole thing is worth a read. You can find it here.