Hundreds of Milwaukee fast-food and retail workers are walking off the job today for the freedom to join a union and to better their lives.

The workers, wearing t-shirts that say "We're Worth More," are rallying in the streets outside of their jobs. Said one worker,


Everyone deserves to be able to pay for what their family needs. This is about survival.

Josh Eidelson at The Nation is the go-to guy for news about the new wave of one-day strikes by fast-food and retail workers. He spoke to one McDonald's worker who said she's ramped up and ready: 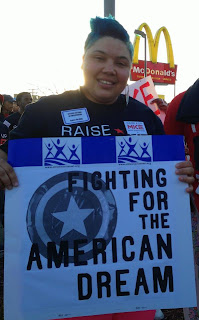 Stephanie Sanders, ... a 33 year-old who recently returning to working at McDonald’s following a stretch in retail, said that she would be striking “basically to help my generation out, and the next generation to follow.” Along with low wages and the lack of job security, Sanders said she wanted to do something about punitive management: “Just because you have on a blue shirt doesn’t mean you’re better than me.”

As I’ve reported, these recent work stoppages share several common characteristics: Each is a one-day strike by fast food workers, backed by a coalition of unions and community groups, lasting a single day, targeting major companies throughout the industry, and mobilizing a minority of the workforce in hopes of building broader support. While different local organizations have been involved in each city’s actions, the Service Employees International Union has played a significant role in all of them.

The campaign expects today’s strikes to involve workers from fast food chains including McDonald’s, Burger King, and Taco Bell. Like Chicago’s, the Milwaukee strike involves retail as well as fast food: workers from companies including TJ Maxx, Dollar Tree, and Foot Action plan to strike. Both industries are increasingly prevalent in – and representative of – the US economy, and both are overwhelmingly non-union.

This is the fifth one-day strike by low-wage workers since the beginning of April. They've walked off the job in New York, Chicago, St. Louis and Detroit before today.


The strikes are getting national media attention. USA Today reported on the strikes today:

A recent wave of strikes by fast-food employees in four cities is expected to spread to Milwaukee Wednesday as demands for higher pay shake up an industry previously insulated from worker unrest.

Front-line, limited-service restaurant workers, a category that includes fast-food employees, earned a nationwide average $9.05 an hour in March, up 2.7% the past three years, according to the Bureau of Labor Statistics. By contrast, the pay of all private-sector non-management employees is up 5.7% in that period.

Adjusting for inflation, fast-food wages have fallen 36 cents an hour since 2010, even as the industry has raked in record profits.

Raise Up MKE tells us:


Many Milwaukee workers make just $7.25 an hour — not enough to support families, or cover basic needs like food, health care, rent, and transportation, without relying on public assistance. Meanwhile, our employers – thriving corporations like McDonald’s, TJ Maxx, Domino’s, GNC, and others – are making billions.