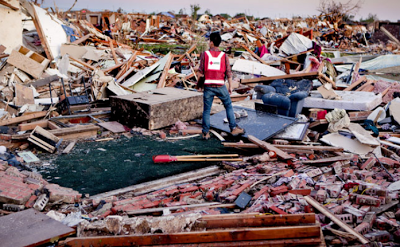 Teamsters are inundating Oklahoma locals with offers to help them recover from one of the most violent tornadoes in history. The twister that ripped through the Oklahoma City suburb of Moore killed at least 24 people and damaged as many as 13,000 homes in a 17-mile swath.

Though the damage hasn't been fully assessed yet, we do know one of our brothers, a UPS package driver, lost his wife in the violent storm. His 8-year-old son is in intensive care with multiple injuries. At least a dozen Teamster homes were leveled by the violent storm.

Brother Ron Cobb, president of Teamsters Local 886 in Oklahoma City, said it's too early to volunteer for recovery efforts.


They're not letting anyone into these areas. They're locked down. The churches they're using for command centers are so packed they can't move.

Things will change in two weeks, he said, when volunteers will be needed for clean-up and recovery. But for now,


What little help we need right now as far as bodies go, we can do it ourselves.

Right now Local 886's agents and retiree volunteers are reaching out to members and retirees to find out what the damage is and what their needs are. "We're getting our people whatever we can give them," Cobb said. He urges Teamsters to donate to the Teamsters Disaster Relief Fund. (Just click here to make a tax-deductible contribution.)

Cobb said the IBT handled disaster relief well in 1999, when he helped to pick up the pieces after the devastating tornado hit Oklahoma City.

Brother Roy Gillespie is coordinating disaster relief for the International Brotherhood of Teamsters and the Red Cross. He concurred that volunteers aren't needed yet as relief workers are still rescuing victims.


Things are still up in the air. The Red Cross can't go in there yet. Lots of structures are unstable, and they're still recovering bodies and body parts.

In the meantime, our brothers and sisters in St. Louis are on standby for 12-hour shifts at the local Red Cross warehouse, awaiting word to begin loading 18-wheelers with supplies for the disaster victims. Members of Joint Council 13 have already filled trailers with  food, water, blankets, rakes, shovels, gloves, flashlights and batteries. Those trailers are now bound for Oklahoma City.

Stay tuned for news about recovery efforts in Oklahoma. And if you have family or friends in or near Moore, Okla., you can check on them at the Red Cross site, Safe and Well.