Cries of "No Justice, No Peace" are filling the cavernous Union Station in downtown Washington, D.C., as federal workers protesting their poverty wages are joined by their supporters. 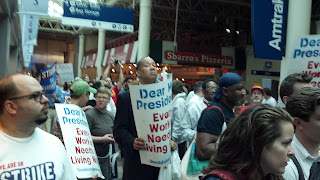 Teamsters are among the supporters who marched through the historic rail station. Some wore t-shirts saying, "We are on strike for a Good Jobs Nation." Some held signs with the message, "Sierra Club Stands With Workers." Protesters briefly confronted police as television cameras rolled.

Federal workers, among the 2 million employed by contractors who earn less than $12 an hour, are on strike for the day. They aren't just rallying at Union Station. They're also picketing in front of the National Air and Space Museum, the Old Post Office and the Ronald Reagan Trade Center.

It's the sixth one-day strike by low-wage workers in recent months. Fast-food and retail employees have walked off the job in New York, Chicago, Detroit, St. Louis and Milwaukee to protest poverty-level wages. The Teamsters support these actions through its affiliation with the Change to Win labor federation.&nbsp 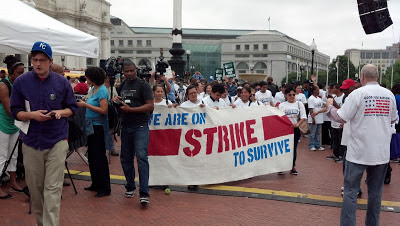 Holding signs that said “Strike to Survive,” the protesters marched into Union Station and picketed throughout the  building. They paraded through the large basement food court where many of the strikers work. At one point, protestors staged a brief sit-in while a banner that read “Strike for a Living Wage” floated to the top of a large dome ceiling, held up by a several dozen balloons. Workers spoke through a megaphone and told their stories of struggling on poverty wages while toiling in the nation’s vast low-wage economy that includes some 2 million federally contracted workers.

Demonstrators chanted “Si, se puede” (Yes, we can), “Can’t survive on $7.25,” and “No justice, no pizza” as they headed back to the front of the station where a rally was held. Representatives of DC’s faith community opened the rally. With the crowd’s hands in the air, Rev. Whit Hutchinson said,


These are the hands with which nothing else works. We are here to remind employers, Congress and President Obama that this city, this country depends on your working hands.

Vilma Martinez, who has worked as a janitor at Union Station for 19 years, told the diverse crowd about her struggles earning just $8.75 an hour with no benefits and a serious medical condition. Justin, a 22-year old local who works at FYE in Union Station said he makes $8.50 an hour and works 17 to 28 hours a week. He is not eligible for health benefits.


It’s not fair. I’m asking Obama to help us. Keep your promise to make change.

Congressman Keith Ellison of Minnesota addressed the rally, pledging his support and advocacy for the workers on Capitol Hill:


This country demands better pay. Your action today comes on the heels of fast food workers who have struck in New York and Chicago. They demand a living wage, paid leave, and benefits. We call on President Obama to sign an executive order to stop federal contractors from paying less than a livable wage.

The rally was closed out by Rev. Graylan Hagler, a mainstay figure in DC’s activist community for workers’ rights. Hagler gave a fiery speech drawing parallels to sharecropping and demanding that the “federally-funded sweatshop economy” be overturned. After the rally, a contingent of protestors and workers marched to Capitol Hill for a hearing organized by the Progressive Caucus to discuss the issue of low-wage workers providing services on behalf of the federal government.


A flash mob will occur around 530 eastern. You don't wanna miss it.

Posted by Teamster Power at 2:06 PM