A history of standing up to intolerance 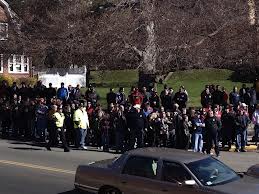 Boston Teamsters standing up to the sickening trolls of Westboro Baptist Church gave union members everywhere a sense of pride. But it was far from the first time the Teamsters have had to deal with hate groups.
Being on the front lines of the civil rights movement, the Teamsters Union has had to deal with its fair share of hatred, including from the Ku Klux Klan.
In a 1946 issue of Teamster magazine (then called “The International Teamster”), a story ran about organizing efforts in the South. “Industry Mobilizes for Fight as Klan Rides Again,” reads the headline to a story about the push to organize in the South:
It appears, therefore, that the unions will face organized resistance on an unprecedented scale before the deplorable standard of living in the southern states can be increased through union contracts.
A more sinister aspect of the industrial resistance is the revival of the Ku Klux Klan almost simultaneously with the labor campaign.
Under the pretext of “Saving the South from Communism,” the Klan is preparing to inject itself into the struggle to maintain the open shop.
Every union organizer will probably be branded a “Communist” as the Klan attempts to ride the crest of a wave of patriotic prejudice to organize the South itself and promote the sale of cotton fabrics woven into the hoods and shrouds of its official costume.
But the union’s history with the Klan goes back to the turn of the century, to the earliest days of the Teamsters Union—all because the union fought for colorblind contracts and gender equality. Here’s more from Teamster.org:
The Teamsters did not just talk equality -- they lived it. Early Teamsters would not allow southern locals to follow the practice of segregation, and in fact threatened to pull charters in cases where this was violated. The first local in New Orleans was governed by an Executive Board that consisted of black and white members, defying southern tradition. By 1906, editorials in the Teamsters magazine were making impassioned pleas for all local unions, but especially those in the south, to organize African-American workers.
The International Brotherhood of Teamsters also championed the cause of women's rights early on. The following was printed in the July 1917 issue of the Teamsters Journal:
"Equal pay for equal work should become a constant, vigorous slogan among all employees in all crafts. The strength and brains of women and girls are exploited the world over and especially so in the United States. All working men and women should become actively, and, if necessary, drastically interested in fighting for equal pay for duties performed by either sex. The standard of living in every workingman's home is lowered by sexual inequality of pay and both sexes should band together and swat the curse from all parts of the earth where it exists."
Later that same year the Teamsters won a clause in a contract for women laundry workers that required equal pay regardless of race. This was a huge achievement and became the first "color blind" contract for workers. This action brought criticism and even threats to the union and its leaders, but they would not be intimidated. By 1919 the Teamsters adopted "Equal Pay for All" as their national slogan.
The Civil Rights Movement
As the civil rights movement grew in the 1950s and 1960s the Teamsters became very involved. The union provided money and supplies to many civil rights groups, including the more than 700 families living in "Freedom Village," who faced retribution for registering to vote in 1960.
The Teamsters had a good working relationship with the Rev. Dr. Martin Luther King Jr., with representatives on civil rights boards and committees. And, union members and leaders were active participants in the movement at a time when such actions were considered risky, if not down right dangerous for any organization.
Scores of Teamsters members were among the more than 200,000 people who participated in the historic March on Washington in 1963. Buses carrying Teamsters arrived from near and far, some driving through the night to join the activities on time. Members who attended described the event as "the greatest peaceable demonstration in the history of the nation." Others reported feeling great pride in the union for its support of the civil rights movement.
But the Teamsters' involvement in social causes was not without consequences.
Viola Liuzzo, the wife of a Teamster business agent was murdered as she drove Marchers to Selma, Alabama in 1965. Dr. King as well as many rank-and-file members, James R. Hoffa and other Teamster leaders attended her funeral.
The Teamsters have met prejudice with demands for equality for a century and have dealt with far more formidable hate groups than the pathetic clowns of Westboro. But it’s great to see that the union still stands strong in the face of intolerance.