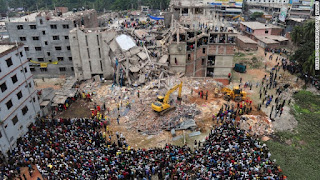 With the death toll from the Bangladesh building collapse now over 1,100 people, the calls for greater safety have become deafening. The government of Bangladesh, in order to create safer work environments, has turned to the most proven method of making workplaces safe: labor unions.

Today, the Bangladesh government agreed to allow the more than 4 million garment workers to form trade unions without previous restrictions.


The cabinet decision came a day after the government announced a plan to raise the minimum wage for garment workers, who are paid some of the lowest wages in the world to sew clothing bound for global retailers.
Those working at the eight-storey Rana Plaza, which housed five garment factories when it collapsed on 24 April, were paid as little as £25 ($38) per month.
Also from the Guardian story, a government spokesperson talks about the changes:
Mosharraf Hossain Bhuiyan, a government spokesman, said ministers had agreed to amend the law to lift legal restrictions on forming trade unions in most industries. The old law required workers to obtain permission before they could unionise.
"No such permission from owners is now needed," Bhuiyan told reporters after the meeting presided over by the prime minister, Sheikh Hasina. "The government is doing it for the welfare of the workers."
Local and international trade unions have long argued for such changes.
Posted by Teamster Power at 1:34 PM