How to stop a fast-food crime wave 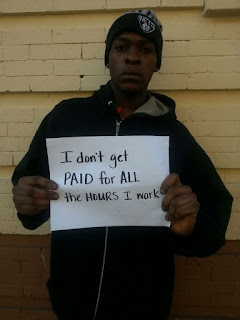 A wave of one-day strikes by fast-food workers may be slowing a crime spree.

Fast-food franchise owners are stealing their workers' wages with impunity. Recently in New York, 84 percent of fast food workers surveyed said their employer robbed them of their pay. In Washington, D.C., food court workers in the government-owned Ronald Reagan Trade Center say they're paid below minimum wage and cheated of their overtime.

Fast Food Forward calls this systematic exploitation of workers a crime wave. In a letter to the CEOs of fast food companies, the group asks them to stop it:


It's time for fast food companies like yours to do the right thing. You can start by paying the men and women you employ enough to support their families. And then stop stealing from them. Stop bouncing paychecks. Stop forcing staff to work unpaid and off the clock. And stop illegally deducting money for things like uniforms and trainings.

Since November, fast-food and other low-wage workers have walked off the job for one day in New York, Chicago, Detroit, Milwaukee, St. Louis and Chicago.


Even though elites are fortunate enough to have a militarized local law enforcement apparatus in place to make sure the rabble doesn’t get too out of control, these flares, indications of broader awareness that in an economy rigged against them, the only recourse is to step outside the system and shout to the heavens...

These low-wage worker actions are small in the grand scheme of things, but significant because of what they represent – mass dissatisfaction with the current economic order. The land of the free imposes lots of barriers to this type of assembly, action and speech, many of them psychological. The American “ideal” of individual work ethic places lots of pressure on people not getting by in this economy to blame themselves, to see their lot as part of some personal deficiency. And when that doesn’t work, there’s good old-fashioned police repression.

Whatever the case, they're having some impact. Some workers say they're getting raises. Others say their bosses aren't retaliating against them.

Mike Elk at In These Times reports,


After Change to Win started talking to workers like Antonio Vanegas at Quick Pita in the Ronald Reagan Building a month ago, the boss got nervous that attention was being paid to the low wages, according to Vanegas. In response, Vanegas and his co-workers got a raise, to $9 an hour.

And Josh Eidelson tells us in The Nation:

Fast Food Forward is asking people to sign a petition showing support for the workers. You can sign the petition here.
Posted by Teamster Power at 12:07 PM