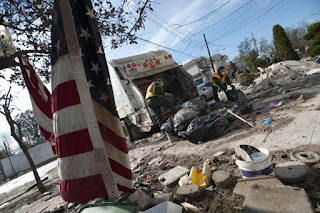 Shortly after Hurricane Sandy hit U.S. shores in late October 2012, the outpouring of Teamster support for those affected was tremendous.


“Teamsters care. It’s in our DNA,” said Jim Hoffa, Teamsters General President, after reports of Teamsters loading trucks with relief supplies, delivering them to staging areas, working with the Red Cross and other groups, and doing a lot of the heavy lifting that comes with rescue and recovery efforts after a natural disaster of that magnitude.


After the storm, Teamsters in the stricken areas worked long hours in horrific conditions to get storm-struck areas back to normal—or at least a semblance of normal. But Teamsters who weren’t close enough to physically help still dug deep and donated to the Teamsters Disaster Relief Fundto help out those Teamsters who had to rebuild themselves.


A couple of months ago, relief checks from the Teamsters Union made their way into the hands of Teamsters whose property was severely damaged.


It was ugly outside on the day Mike Klein got his check from the Teamsters Disaster Relief Fund. “It was raining, I was upset, but getting that help from the Teamsters Union brought some light into my day,” said Klein, a Local 831 Teamster who works for New York City’s Department of Sanitation. Klein is one of many Teamsters who, despite being affected by the hurricane personally, worked through the deadly aftermath.


“We live in an evacuation zone and knew an evacuation order was coming. A year earlier, during Hurricane Irene, we were also ordered to evacuate,” said Klein, who lives on Long Island and works in the Bronx. “We rode out Irene at home. My wife didn’t want to leave the house. It wasn’t that bad. We had a little damage…lost some shingles but we didn’t lose power. We thought it would be the same this time.”


But it wasn’t. Hurricane Sandy turned out to be one of the deadliest and most destructive hurricanes in U.S. history. It was the second-costliest hurricane in American history after Hurricane Katrina. It cost tens of billions of dollars in damage, destroyed thousands of homes, left millions without power and caused dozens of deaths, including some Teamster members and their families.


“We’re on the water, on the bay side. We were completely destroyed. We were allowed to go back in and then directly out a week or so later to get our belongings. We couldn’t stay there, though. We had to go back and forth, back and forth to get our things. The place was in bad shape. Our foundation was destroyed. Engineers said we had to get it redone. A lot of things have to be redone—all the plumbing and electric, for example.” It took months before he and his family could get back into their home, incurring many expenses along the way.


“When we got back in, obviously we hadn’t had a chance to repair much yet. The insurance money hadn’t come through yet. We did what we could just to be in the house…to have a roof over our heads,” Klein said. “It’s hard to describe to people what it was like to watch the houses on either side of me get ripped apart.”


Normalcy has since returned to his life thanks, in part, to the Teamsters Disaster Relief Fund.


“When I came home from work with the check from the Teamsters, it brought my wife to tears,” Klein said.


“You don’t know what that relief fund has meant to our members. We have sanitation workers that live and work in New York City and our claims were really high,” said Harry Nespoli, President of Local 831 in New York City, which represents sanitation workers. “I went out to Rockaway, Coney Island, Staten Island—all the hardest-hit areas. It was devastating. Many of our men were there working in the neighborhoods with their own homes wiped out. They were living and sleeping in the garages. They worked 12-hour shifts. We had guys that took the trucks out on their own time and worked for nothing, just to help.”


Joey Manuel was one of those workers who went right into work directly after the storm despite the trauma of losing his own home.


“This whole experience has really changed my life,” said Manuel, a steward and clerk with the New York City Sanitation Department. “After an experience like this, you see how fragile life can be. It’s there at one point and it could be gone the next.”


Manuel was watching football on TV when he noticed water rising outside of his house. There wasn’t much at first…just a sidewalk underwater. It’s didn’t take long for it to get worse.


“Sure enough the whole corner of my block is soon underwater…within half an hour, me and my mother were paddling through it. We didn’t realize the whole basement had been filling up underneath us. It has an 8-foot ceiling and it filled up then started coming in the rest of the house,” he said. “I told my mom that we had to get out so we got in the car, which was ankle deep in water in the back yard by then. By then the whole neighborhood was full of water. The car got submerged while we were in there with all of our personal belongings that we were trying to take with us. We had to get out because water was coming into the car. I open the door, water rushes in. I get out, get my mom out and bring her back to the house. We go up to the top floor and stay there.”


Through it all, Manuel and his mom were dodging boats floating down their street, power lines coming down and other hazards. In the end, his home was almost completely destroyed, but he still went to work that day.


“I was a zombie,” he said, but he realized there were people—his neighbors, friends and family—that still needed help. So he got to work, like hundreds of other Teamsters. Manuel recently got his check from the Teamsters Disaster Relief Fund.


Teamster magazine wrote about the union’s reaction to the storm in the Winter 2013 edition and had this to say about the city’s sanitation workers:


Those Teamster sanitation workers cleared more than 300,000 tons of debris from neighborhoods after the storm. The Staten Island Advance newspaper reported,“The Sanitation workers arrive like heroes in Staten Island’s devastation zone…New York City’s Strongest are showing up in force—with bulldozers, dumpsters, and hundreds of workers on duty at a time, clad in gloves and dust masks, doing the back-breaking work of cleaning up, neighborhood by neighborhood, in the hardest-hit zones.”


“We really appreciate everything from the Teamsters. It really helps,” Manuel said.


“Getting that check with the Teamster name on there made them feel good. The checks went to buying groceries, some are still making repairs on their homes,” Nespoli said. “It’s not so much the money, though. It’s that people care. New York had never been hit anything like this before and it was good to see other people, our Teamster brothers and sisters, reach out and help. I was really proud of the Teamsters on this particular front. It meant a lot.”
Posted by Teamster Power at 2:37 PM