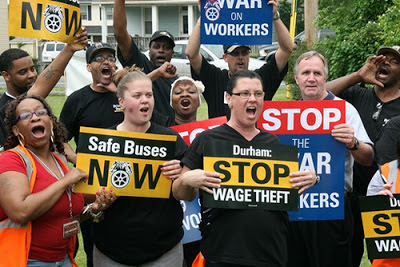 Sister Stephanie Urosa, a six-year attendant on a bus for children with special needs, said she has reported mold problems on our bus for years and the problem is not fixed.

I’m scared for the kids on the bus. Some of the children we transport have weakened immune systems and allergies and they don’t need to be exposed to this. Mold is just one of a number of safety concerns we have.

Bus drivers and aides employed by a Baltimore schools contractor say that unsafe conditions such as fires and mold spores are endangering lives and unfair wages are threatening their livelihoods.

The grievances were aired Thursday at a rally of employees of Durham School Services, a national company that transports children in more than 350 school districts. Since 2002, the city has contracted with Durham, which earned an estimated $15.5 million over the last three school years. The company's buses transport about 928 students.

The company is facing a collective-action lawsuit, representing 85 drivers and aides who work for the Rosedale-based affiliate of the company.

The federal suit, filed in U.S. District Court on March 12, says the company has not paid workers for the hours they earned carrying out responsibilities required for transporting students, such as pre- and post-trip inspections, fueling and cleaning buses. The suit also says the company didn't pay the workers overtime they earned or pay it on a timely basis.

"We believe that the workers are performing a variety of tasks that are integral to bus driving that they're not being paid for," said Brooke Lierman, who is representing the workers in the federal suit. "They're performing work for free."