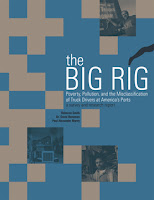 The Teamsters today released a new report about the 110,000 port truck drivers who are victims of an illegal employment-classification scheme. The report is part of an effort to step up pressure on the government to do the right thing about misclassified employees.

Teamster Vice President Fred Potter told the Wall Street Journal that unions will push the government to file lawsuits against companies that misclassify and to enforce employment, tax and safety laws.


The report was sponsored by the National Employment Law Project (NELP) and Change to Win.  The report said misclassified port drivers are consigned to poverty, dangerous working conditions and job insecurity. It also concludes that the filthy air around ports results from trucking companies misclassifying drivers.

"Trucking companies dictate how, when and where drivers do their work," said one of the report's co-authors, Rebecca Smith, an attorney with the National Employment Law Project. "Labeling them ‘independent’ is just a way for companies to sneak out the back door and skirt their responsibilities."

Trucking companies across the U.S. are rigging the game by forcing port drivers, who ship everything from tennis shoes to televisions across thousands of miles, into taking poverty-level wages. This report sheds light on an underground economy in which companies are skirting a host of obligations in order to profit greatly – at great cost to the people they hire, the government, the public, and other businesses that play by the rules.

Posted by Teamster Power at 5:23 PM