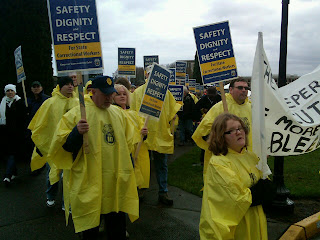 Today in Olympia our brother and sister Teamsters protested job and program cuts by the Washington State Department of Corrections. It's the latest in a series of actions by Local 117 on behalf of 6,000 workers at Washington State prisons. 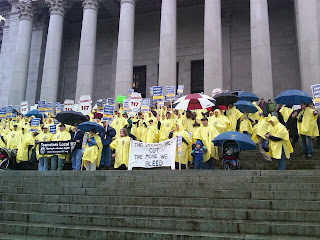 Hundreds of correctional employees converged on the Statehouse to demand safety, dignity, and respect for Washington State prison workers and their families.
According to Local 117's press release:

"We are no less important than the police who patrol our streets and keep us safe, no less important than the firefighters who run into the burning buildings to save our loved ones," said Carl Granger, a correctional officer at the Monroe Correctional Complex, who spoke at the rally.
"We will fight any cuts that pose a threat to the safety of brave men and women who work inside our state's prison system," said Teamsters Local 117 Secretary-Treasurer Tracey A. Thompson. "Your actions here today send a powerful message to the legislature that we are united in defending our rights to a safe work environment."

On Nov. 17, they picketed the Monroe Correctional Complex.