Another reason not to sign a trade deal with Colombia 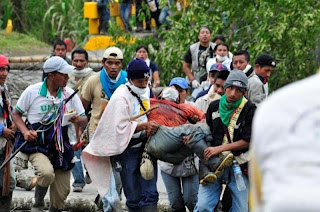 People are still getting killed in Colombia just for belonging to a union, we learn from US LEAP (U.S. Labor Education in the Americas Project). What's worse, the Colombian government only manages to convict a handful of the murderers.

This matters because corporate-backed groups in the U.S. are agitating for a job-killing trade deal with Colombia. For example, the Brookings Institution posted to its blog an argument for sending the agreement to Congress just before Christmas. Wrote Brookings' blogger,

If the White House is serious about the Obama’s 2010 State of the Union target to double exports over the next five years, it must seize this opportunity to increase trade and send the Colombian trade agreement to Congress.

We urge the Brookings Institution to do some homework, which will show that trade deals actually retard U.S. export growth.  We also urge Brookings to read the US LEAP report, which pointed out that in 2009, the backlog of unresolved cases increased last year. That means there's been no progress in the effort to bring murderers to justice. US LEAP says,


The vast majority of convictions have not uncovered the real instigator of the crimes, particularly those who benefited from the murders in economic and government sectors. Incomplete justice in each of these cases conceals the role of these acts of violence as part of an overall anti-union strategy, limiting progress.

Fortunately, Brookings is reporting that President Obama said he won't ask Congress to approve the deal because there aren't enough votes to support it. Let's hope things stay that way.
Posted by Teamster Power at 3:21 PM