It's going to be a long four years in WI 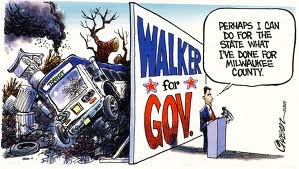 Wisconsin Gov.-elect Scott Walker isn't the only reason the state's workers can look forward to a miserable future.

Behind the cheese curtain, companies are threatening to leave the state in order to force concessions from employees. Mercury Marine, Kohler and Harley-Davidson all extorted drastic cuts in pay and benefits from their workers. By "drastic," we mean things like multi-year pay freezes, big jumps in medical costs and a two-tier system that pays new hires 35 percent to  45 percent less.

Walker isn't even in office yet and he's strengthened the corporations' hand by killing a high-speed rail project that would have created hundreds of jobs.

Now, AP's Scott Bauer reports that Walker wants to fire all 400 workers at the state's Commerce Department and make them reapply for their jobs.

Walker will no doubt support a state representative's bill to weaken unions by letting workers get union pay and union benefits without paying for the cost of negotiating union contracts. Most people understand that the anti-union proposals springing up all over the country are payback to the corporations who poured money into politicians' campaigns. Still, it's likely to get worse before it gets better.

Walker was elected on a promise he'd create 250,000 new jobs in Wisconsin. He probably won't. And even if he did, who'd want the kind of crap job Walker would create?
Posted by Teamster Power at 8:40 AM