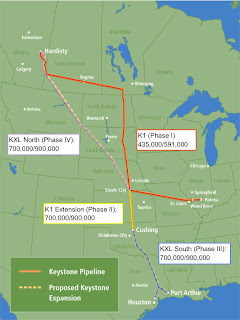 Building a pipeline from Alberta, Canada to the Gulf Coast would directly create 13,000 good union jobs and indirectly create 118,000 more jobs. It would also nearly double the amount of oil we can import from Canadian oil sands.

The proposed $7 billion Keystone-XL Pipeline is being reviewed by the State Department for potential environmental problems. Secretary of State Hillary Clinton said in October she's "inclined" to approve the project. That was before the Teamsters and three other unions sent her a letter urging her to approve the pipeline.

Politico reports today that the Teamsters and the other unions met Tuesday with Environmental Protection Agency officials. We stressed how important it is to finish the review quickly because of those 13,000 jobs.

Pipeline opponents -- environmental groups like the National Wildlife Federation and the Sierra club -- say the pipeline could pollute the air and water and hurt wildlife.

Sen. Mary Landrieu of Louisiana has a response to that:

For people that continue to criticize pipelines coming from Canada to Texas, drilling done offshore, I just wish they’d turn their lights off, get out of their automobiles, turn their heating off for the summer and put a windmill in their backyard and stop complaining.

Posted by Teamster Power at 1:15 PM