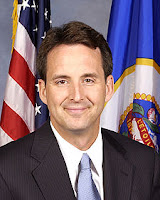 Tim Pawlenty is finishing up his second and last term as governor by ranting against unions. Today he wrote an op-ed in the Wall Street Journal and appeared on Fox News to sling mud at public employee unions.

Pawlenty wants to run for president -- seemingly on an anti-union platform. That shouldn't be a surprise, considering that he once worked for a union-busting law firm.

Here's some of the crap that Pawlenty was throwing out today. From the Journal:


Public employee unions contribute mightily to the campaigns of liberal politicians ($91 million in the midterm elections alone) who vote to increase government pay and workers. As more government employees join the unions and pay dues, the union bosses pour ever more money and energy into liberal campaigns. The result is that certain states are now approaching default. Decades of overpromising and fiscal malpractice by state and local officials have created unfunded public employee benefit liabilities of more than $3 trillion.

This is so false on so many levels that it's hard to know where to begin. Well, we could start by pointing out that unions were outspent 11-to-1 by corporate interests who are now attacking unions.


...experts have attributed California's budget shortfalls to the state tax system and the economic downturn, and the claim that public sector employees make twice that of private sector employees is based on a discredited apples-to-oranges comparison...

And as far as "states approaching default," Media Matters quotes our other friends at The American Prospect, who say


"[p]olitics, not plummeting prosperity, are at the root of California's dysfunction." They further wrote that California has "three overlapping budget problems," including "declining revenues resulting from a long, deep recession"; "irresponsible fiscal policies"; and "the fiscal straitjacket created by Proposition 13."