Here's what us union thugs do at Christmas

We collect toys and money for poor children, feed the hungry and hold parties for the needy, that's what we do.

New York Horse and Carriage Association brought 500 pounds worth of boxes of pasta, along with cases of canned vegetables, tuna, chicken broth and other foodstuffs, the magazine reported. They also brought money to City Harvest in a horse-drawn carriage led by Olympia, a 13-year-old Belgian draft horse. 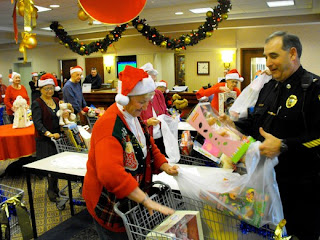 Farther north, Teamsters Local 25 donated $60,000 worth of toys to charities. According to The Boston Globe,

...the union has spent the past 14 years collecting toys from dispatch stations in many communities and town organizations, helping to bring toys to children in need.

In Florida, Teamsters threw a party for kids at the SafeHouse of Jacksonville at the union hall. In Harrison, N.Y., they donated money to buy families who relied on the lcoal food pantry a movie outing for the holidays. In Mississauga, Canada, Local 938's Retiree Club gave money and toys to the local Santa Claus Fund.

Those are just a few things us union thugs do at Christmas.
Posted by Teamster Power at 9:45 AM