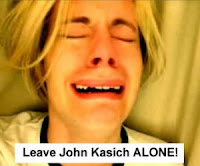 Props to the Cleveland Plain Dealer for pointing that out to incoming Gov. John Kasich. Here's the whole quote:


No economy ever grew by arbitrarily driving down the living standards of working people -- including those who toil for their fellow taxpayers.

Yup, it's going to be a long four years in Ohio. Kasich, of course, is simply paying back the corporate zillionaires who got him elected. The Columbus Dispatch lists some of them: Donald Trump, billionaire casino investor Sheldon G. Adelson of Las Vegas; Baltimore Ravens owner Stephen Bisciotti; Stanley Fulton of Anchor Gaming in Las Vegas; Peter Coors of Coors Brewing in Colorado; and Gerardo Larrea of San Juan, Puerto Rico, CEO of South American Restaurants Corp.

Sen. Shannon Jones, R-Springboro, also marches to the tune that the corporate zillionaires are playing. The Dispatch lists some of the proposals she's considering for next year. She wants to eliminate collective bargaining for public service employees, and
We're counting on our brothers and sisters in Ohio to put up a good fight against Kasich's plans to wreck the state economy.
Posted by Teamster Power at 11:53 AM