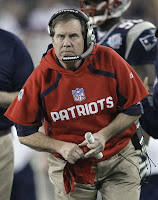 What football legend has a father who lost a college coaching job because the college board of trustees considered him "undesirable" due to HIS father being a union organizer?

You probably guessed from the photo that the answer is "Bill Bellichick." SMWIA tells us Bellichick's father, a coach himself, was dismissed by the Board of Trustees at Vanderbilt University because he came from what they considered "bad stock" - that being Belichick's grandfather having been an organizer with the United Steelworkers in Youngstown, Ohio.

Here's another one: Which NFL quarterback is a union activist and member of the NFL Players Association (NFLPA) Executive Committee"

According to American Rights at Work, the answer is New Orleans Saint Drew Brees, a model athlete who's been deeply involved in the reconstruction of New Orleans. Brees is trying to avert a lockout by the owners next year. A lockout would cost hundreds of thousands of jobs in cities that host NFL teams. American Rights at Work asks that you sign a petitition urging the NFL not to lockout the players.
Posted by Teamster Power at 4:55 PM