Save the Teamster Truck Museum! 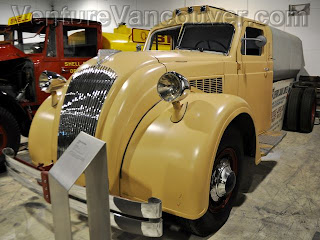 Anyone have any ideas about where the Teamster Truck Museum can go, now that the rent was jacked up at the current location, a warehouse in British Columbia?

The Tri-City News reports that the museum might be forced to sell its collection if it can't find a cheaper place to store the trucks. Reports the newspaper,


The museum generally charges a donation for groups that want to tour the vehicles and some income has been generated by renting out trucks for film production. But that's not enough to keep the museum running, according to Don McGill, president of the BC Teamsters' Union.

"Our organization has been funding this 100% and we just can't do it anymore," he said.

It would be a shame to lose such an important piece of trucking history. Men drove some of those trucks in conditions so dangerous they make Ice Road Truckers look like pikers. Harry Rudolfs at Truck News Blog quotes an author who wrote about the Wild West days of trucking in British Columbia's Fraser Canyon:


...we were fighting miles of unploughed snow, or in the spring break slugging through gumbo. It still makes me shudder to think of those stops in deep winter, when you dropped from the heat of the cab into the shock of freezing weather, then the trip around to the tail-gate, and frozen ropes. And the tarp stiff as a piece of steel. Before you got the tarp on the roof, and sorted through the load for the pieces to be delivered, then wrapped everything up again and collected monies due, and got the waybill signed, your fingers would be so stiff and chilled that for miles after you would be sitting first on one hand then on the other to bring back the circulation—and man, how they would hurt! And meanwhile you were still trying to shift gears and keep the rig on the road, and thinking, “Damn the way-freight!”

The author, Andy Craig, once owned the restored 1936 Indiana (pictured below) now in the museum. 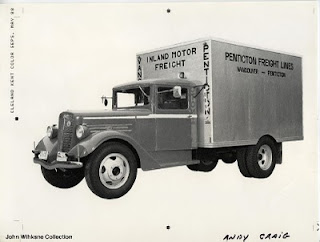 Craig wrote "A History of Trucking in British Columbia Since 1900."  A few used copies are available on Amazon. Craig sold the books out of the back of that truck, having built a narrow bunk built into the box's nose where he slept when he was on the road. It was the first commercial vehicle to drive across the newly-opened Coquihalla Highway when it opened in 1986, with Craig at the wheel. He died the next year.
Other trucks in the museum include a 1935 K52 Dodge Airflow, Maple Leafs from the '30s and '40s and a 1932 International A4 Tractor. Here's a slide show of the museum and its collection. The museum also includes truck memorabilia, according to a 2003 story in Truck News.


A truck driver’s leather belt with silver badges cleated into its skin sits behind a glass case. The badges were chauffeur licenses from the 1930s. Other cabinets show BC license booklets (fee $1) from the early decades of trucking, and a union dues stamp book from 1937.