The Teamsters are welcoming 1,300 new members today, customer service professionals for American Airlines. The campaign was a joint effort with CWA to form the Teamsters-CWA Customer Service Employee Association for all 15,000 passenger service agents at the new combined American-US Airways.

Workers voted for the new association by a 6-to-1 margin during a month-long election administered by the National Mediation Board.

The new Teamsters join the union's nearly 2,000 passenger service members at US Airways, which is merging with American.

According to a Teamsters statement,


American Airlines agents who have won representation for the first time are concerned about outsourcing, job security, fair work rules and having a strong contract. The agents know from experience how vulnerable they are without representation. American’s 2011 bankruptcy led to layoffs, outsourced job titles, and sharp cuts in pay and benefits for those who kept their jobs.

“I can’t tell you how great this victory is for us,” said Debra Ewing, a 15-year US Airways agent in Phoenix, Ariz. “American Airlines customer service agents have tried for over 20 years to gain representation and the merger with US Airways allowed the Teamsters to step in and bring home a win. This means an end to so much outsourcing for American agents who will regain profit-sharing, shift differentials, a three-tiered medical plan, paid vacation and more. That’s what union representation is – and now we all have it.” 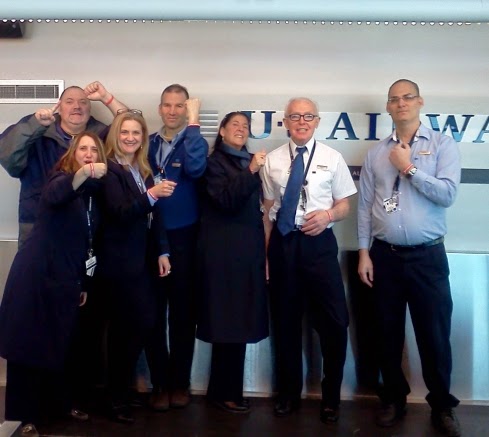 US Airways’ latest merger with American Airlines, whose agents were nonunion, led to an election to determine representation for all agents at the newly-merged carrier.


With our partners in CWA, the Teamsters are leading the way in protecting airline professionals involved in the biggest airline merger in history. Our union is dedicated to fighting on behalf of workers in this volatile industry. Our new members at the combined American-US Airways now have two of the strongest airline unions in their corner.

Posted by Teamster Power at 5:08 PM