Teamsters help push Uber, Lyft and 5 tech giants out of ALEC since August 20 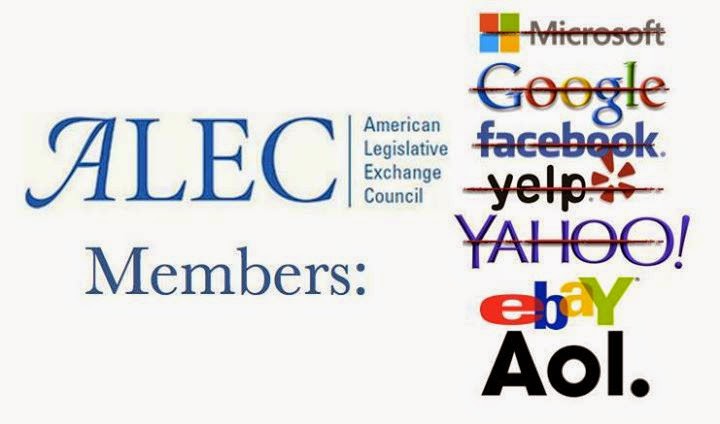 Uber and Lyft just now announced they are leaving ALEC, just after four tech giants in four days announced they're severing ties with the corporate escort service for state lawmakers.

Earlier this week, Google, Facebook, yelp and Yahoo! announced they're dumping ALEC. And on August 20, Microsoft said it was leaving as well.


Two of the largest ride-share companies in the United States, Uber and Lyft, have confirmed to Common Cause that they have no interest in continuing to participate in the American Legislative Exchange Council (ALEC), a secretive corporate lobbying group.

Uber and Lyft were invited to ALEC’s annual meeting in Dallas in August and spoke on a panel dealing with the ride share industry. Uber even offered ALEC convention attendees a 30% discount on all rides in Dallas during the conference. Uber also was listed on ALEC’s secret 2013 prospects, published by The Guardian in December 2013.

Despite ALEC’s efforts to recruit the two growing companies to become corporate members, Lyft spokesperson Chelsea Wilson told Common Cause that the company was “not a member” and has no plans to participate or join the organization. Lane Kasselman, a spokesperson from Uber, also told Common Cause “we attended the Dallas meeting, but are not members and have no plans to participate, fund, or join the organization.”

These devastating losses for the Koch-funded lobbying shop result from the efforts of Teamsters and other union members, environmentalists and civic groups. As part of the ALECexposed community, we've worked hard to shine a spotlight on the corrupting influence of this shadowy group.

As Insider Brief reports years of effort are coming to fruition:


Everyday this week we have witnessed one tech juggernaut after another publicly part ways with ALEC (we - the ALECexposed community - has been directly encouraging them come out of the reprehensible-policy-closet this week).

Though the anti-ALEC campaign has recently focused on climate change, the recent development are great news for anyone who cares about workers' rights, workers' safety and workers' standards of living.

Or, for that matter, anyone who cares about civil rights, democracy, public education, income inequality, privatization, retirement security or taxes (ALEC wants them raised on you, cut for the billionaires).