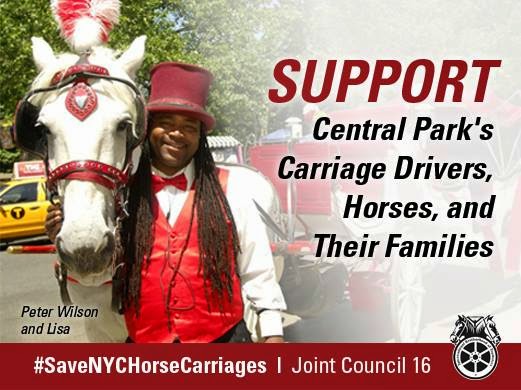 On the eve of New York Mayor Bill de Blasio's visit to Manchester, England, a British-based labor federation asked the city's council members to support Teamster horse-carriage drivers.  At the same time, an Australian horseman gave his stamp of approval to the horse carriages.


On behalf of the International Transport Workers’ Federation (ITF) , I would like to add our organisation’s voice to those of the members of Teamsters Joint Council 16 and Teamsters Local 553 – and all those who support the continuation of New York’s horse drawn carriage industry.

...we consider this industry to be a vibrant, well-established asset to the City of New York, and can see no meaningful reason to deprive the workers involved in it of their jobs, deprive visitors of the pleasure it generates, or deprive New York of one of its landmark sights.

The men and women who work with these animals do so with pride. Horse drawn carriages are part of the tourism or transportation infrastructure of many countries. The carriages of Central Park are part of what makes New York a global capital.

We have no doubt that you have examined the case for and against the continuation of this important industry, and feel confident that you will support those who work in it and the best interests of the City that it serves.

Unite, an ITF-affiliated union, plans “to raise the issue with New York Mayor Bill de Blasio when he attends the Labour Party conference in Manchester.”


World-renowned Australian horseman Guy McLean gave his stamp of approval to the New York City's carriage horses after watching the gentle giants at work in Central Park this weekend.

“The ones I saw didn't break a sweat. They love the work," said McLean, who was in town for the Central Park Horse Show. "And I've got to say, they look bright in the eyes and coat. These horses weren't working hard, not in the traditional sense, at least."...

"You're not saving these horses one little bit by taking their job away,” he said. “These horses are happy. They look like beloved team members. And that's what they are."