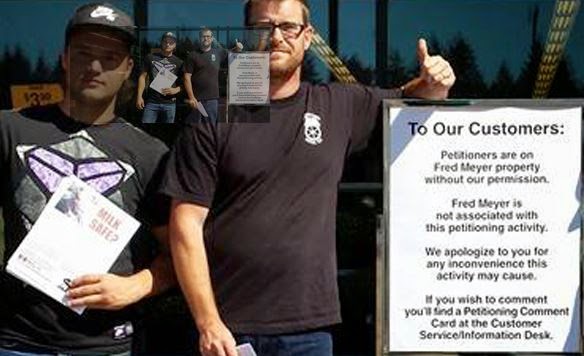 Great news from Washington State, where our brothers and sisters from Teamsters Local 117 voted on Saturday to ratify a contract with Fred Meyer, a subsidiary of Kroger, Inc. They stood together and bargained a contract that maintains affordable health care and protects members against subcontracting.


Congrats! to warehouse workers at Fred Meyer who have just voted to ratify a new 3-yr contract! @Teamsters

The contract covers 388 warehouse workers at the company’s grocery distribution center in Puyallup.
The contract ratification vote is especially sweet because of the fight to get it. Teamsters at Fred Meyer worked without a contract for five weeks. Talks broke off on Sept.10, and Teamsters and allies passed out leaflets describing their concerns at Fred Meyer stores in four states. The International Brotherhood of Teamsters authorized strike support for the Fred Meyer workers.


When Fred Meyer intimidates workers, threatens to outsource their jobs, or insists on degrading their medical coverage, it harms the entire community.

A federal mediator stepped in, and the union and the company reached agreement on Monday, Sept. 22.

It all goes to show,


United we bargain, divided we beg.

Posted by Teamster Power at 2:47 PM