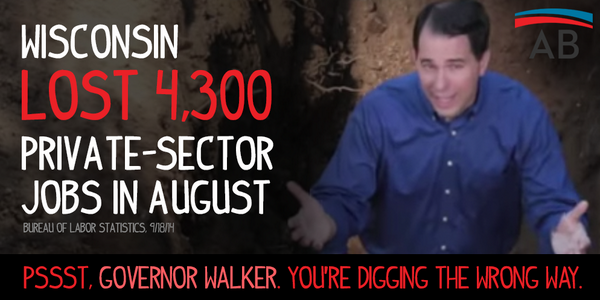 Wisconsin lost 4,300 private-sector jobs last month, the Bureau of Labor Statistics announced today. The timing is unfortunate for Gov. Scott Walker, who campaigned on a promise to create 250,000 jobs in Wisconsin. Now he's running for re-election and his promise is coming back to haunt him.

He has only himself to blame. One of his first acts as governor was to cancel a high-speed rail project. The Cap Times reported in June the move cost several hundred manufacturing jobs in one of Milwaukee's poorest neighborhoods and 4,000 construction jobs:


It didn't get a lot of press — two Milwaukee bloggers noted it — but Talgo, the Spain- and U.S.-based train manufacturer, closed its factory on Milwaukee's north side last week and moved the last of its train sets out of town. They will probably be sold to Michigan.

The irony is that here was a manufacturing company that was enticed to Wisconsin thanks to a bundle of federal dollars but was chased away by a new governor who professed his main interest was creating jobs and making Wisconsin friendly to business. Yes, go figure.

Instead, he kissed goodbye several hundred jobs that would have been created in one of Milwaukee's poorer neighborhoods and gave the federal government back $810 million that was to pay for expanding passenger rail service from Milwaukee to Madison and create roughly 4,000 construction jobs to boot.

It is not only one of the biggest financial blunders in the state's history, but ranks high for its utter cluelessness. And its says volumes about the governor's judgment.
Talgo is now suing the state for $65 million for the state's reneging on its Talgo contract, and Wisconsin has to foot the bill for a multimillion-dollar maintenance facility and handicap accessibility upgrade at the Milwaukee station, all of which would have been covered by the $810 million federal grant.

The train sets originally destined for a Madison-Milwaukee run will now run between Chicago and Detroit, it was just announced.

Posted by Teamster Power at 1:35 PM