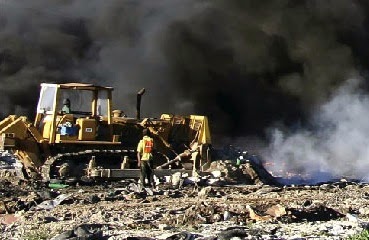 Microsoft co-founder Bill Gates is the dominant shareholder of Republic Services, which owns a burning landfill near a nuclear dump.

Gates has the power to convince Republic Services to evacuate families living next to a burning landfill.


Buying Allied Waste in 2008 brought Republic Services to the St. Louis area. The acquisition also made it the owner of an infamous landfill...an already-closed dump where a smoldering mass of underground waste was detected in December 2010...

What the company calls a “smoldering event” triggered by a chemical reaction has produced noxious odors that blanketed nearby communities and raised the ire of residents for more than two years. That anger has gotten the attention of state and federal regulators, politicians, lawyers and national environmental figures.

Grass-roots citizens groups have formed as the landfill burned, and it has become a cause célèbre for environmental groups worried the smoldering could reach nuclear waste illegally dumped 40 years ago in the adjacent West Lake Landfill. Some residents have filed lawsuits, others want buyouts, and federal regulators have reconsidered a plan to cap the radioactive waste.

Even the International Brotherhood of Teamsters, which represents about 9,000 of Republic’s workers and has had a contentious relationship with the company over the years, joined the chorus calling for buyouts and removal of the waste.

Please ask Bill Gates to make Republic Services put out the fire and evacuate the families nearby by signing the petition here.

State health investigators found a high rate of brain and nervous system cancers among children 17 and younger in the area near the landfill, in a report just released. There were seven such cancers in that age group compared to an expected 2.5 cases..

Parents of children at Rose Acres Elementary school believe the number of cancers among students and staff members has recently increased, and have asked the health department for a separate study at the school.

Near the burning landfill and nuclear dump is a family with four little girls. The youngest is in first grade today and the oldest is no longer with us. After a series of test her parents were told that their little girl had a rare type of brain cancer—a tumor.  They did everything medically possible to save their child but in the end, four years after she was diagnosed, she died.

Her mother never stopped looking for the cause of the cancer. As she investigated what was in the air outside her window,  she believed she found the cause of her daughter's death. Not only was the air smelly, but it contained cancer-causing chemicals like benzene and likely radioactive dust.

Today, she’s very frightened for the health of her other three girls.

Bill Gates can help protect this family and others living in the community. Please ask Bill Gates to make Republic Services clean up the dump site and evacuate the families nearby by signing the petition here.